JACKSON COUNTY, Ala. (WHNT) – Authorities jailed a man Thursday morning on charges that he hung a puppy from a tree in the woods in Alabama.

Jasen Charles Howard, 42, of Wheatfield, Indiana, was booked into the Jackson County Jail on Thursday on charges of animal cruelty and drug paraphernalia possession. 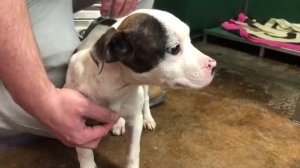 A witness saw Howard take the puppy into the woods, said Jackson County Chief Deputy Rocky Harnen. When the witness went into the woods to check on the dog, it was found hanging.

The witness cut down the puppy and called the police, Harnen said. The puppy was taken in by animal control officials and is OK.

When authorities stopped Howard’s car, he told them the dog had parvo, a highly contagious canine virus, but he didn’t have a gun to put it down, Harnen said. A test for parvo on the puppy came back negative, he said.

Another dog Howard had with him when he was stopped also was taken by animal control, Harnen said. An animal control officer said the older dog was Howard’s longtime pet and the puppy had recently been given to him.

RICHMOND, Va. (WRIC) - A team of researchers at Virginia Commonwealth University are working to develop a face mask that not only prevents the spread of COVID-19 but actually kills the virus.

The research team said that typically, the masks we're used to wearing can capture airborne viruses, but they do not kill the virus.

(NEXSTAR) - A prominent study from the UK looking at the effects of mixing COVID-19 vaccines found that participants saw a better immune response when they received a different second dose weeks after their first.

The findings from the University of Oxford-led Com-Cov study, headed by Professor Matthew Snape are encouraging for countries where vaccine supply may be more limited.

Duarte, a rookie shooting guard, eclipsed his 13.1-point scoring average with 14 in the first quarter, when the Pacers seized control with a 15-2 run. Indiana outscored New York in each of the first three quarters to lead 96-76 and mainatined a double-digit lead from midway through the second quarter until the final buzzer.

Indiana COVID-19 hospitalizations increase more than 20% in a week