Heidi Bushnell announced Tuesday that she has found her lost wedding ring! 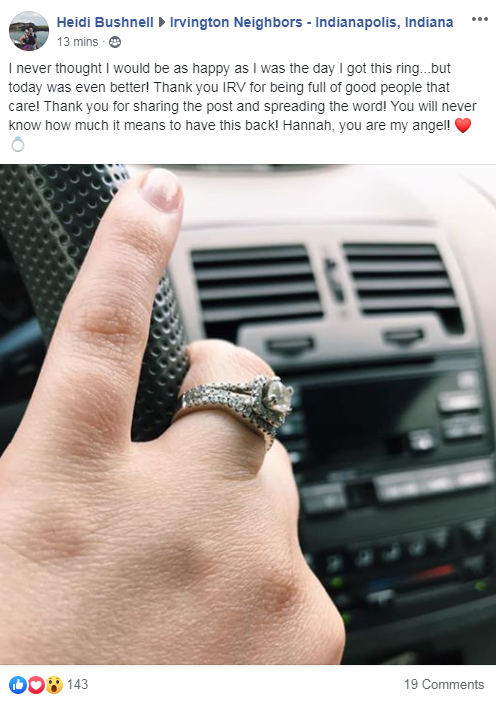 INDIANAPOLIS, Ind. – An Irvington woman is asking for the community to help her find her lost wedding ring.

Heidi Bushnell was out on her routine jog around the east side neighborhood when her hands began to sweat, so she tied her engagement ring and wedding band to her shorts, as she has done many times before.

At the end of her 2 to 3-mile run, she noticed her rings were gone.

Bushnell says the only silver lining in the situation is that it has brought her closer with her neighbors.

“I’ve just had a huge response. Somebody I’ve never met came out and helped us walk the whole path yesterday,” said Bushnell. “Several people have offered out metal detectors and I’ll go after work and look.”

Bushnell is asking anyone in her area to help look for her lost rings.

“I would ask that if you’re out walking and you see something shiny if you just take a second to stop bend down and see what’s down there.”

She and her husband say they’re willing to offer a reward if someone finds them.

“I would love, love, love for somebody to find it,” said Bushnell. “I hope it ends up in good hands with someone that would return it to me. Of course we would love to reward anyone who does that.”

(CNN) -- Antibody tests used to determine if people have been infected in the past with COVID-19 might be wrong up to half the time, the U.S. Centers for Disease Control and Prevention said in new guidance posted on its website.

Antibody tests, often called serologic tests, look for evidence of an immune response to infection. "Antibodies in some persons can be detected within the first week of illness onset," the CDC says.

CAPE CANAVERAL, Fla. (AP) — With the weather looking up, SpaceX and NASA officials vowed Tuesday to keep crew safety the top priority for the nation's first astronaut launch to orbit in nearly a decade.

INDIANAPOLIS — There were several developments in the coronavirus pandemic that you may have missed overnight.

Mayor Hogsett to announce next steps in reopening Marion County

Guidance for Hoosiers unable to pay rent due to coronavirus

Mayor Hogsett to announce next steps in reopening Marion County