Indianapolis, Ind. (August 18, 2015) – IndyGo is getting ready to take the first big step toward a one-of-a-kind electric bus transportation system connecting Westfield to Greenwood, but your thoughts are needed first because it will have an impact on traffic.

IndyGo says this would be the nation’s first battery-operated bus rapid transit project. 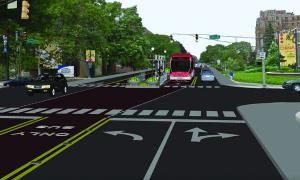 The first in a series of public meetings is Tuesday at the Central Library, 40 E. St Clair Street, from 5 to 7 p.m.

This meeting is about the first phase of the proposed system, called the Red Line. The first phase would run from Broad Ripple to the University of Indianapolis, passing through the transit center currently under construction downtown.

“This is a really upgraded transit service, with frequent all-day service, operating in dedicated lanes,” said Bryan Luellen, Director of Public Affairs for IndyGo. “We’re looking at the travel time being really competitive with driving between downtown and Broad Ripple, so it’s going to be a great option for people who want to leave their cars at home and it will be a great improvement for current riders. The Meridian Street corridor represents 15% of IndyGo’s ridership right now, so it will be a huge improvement.”

There would be stations every half mile along the route.

Luellen says although this is an exciting project, they need public input because the Red Line will impact the traffic flow. There will be parking and left turn restrictions along College Avenue in particular.

IndyGo wants to nail down plans for the first phase before applying for a federal grant next month. The grant would come from the Department of Transportation’s “small starts” program, which funds projects such as bus corridor improvements.

The estimated cost of the first phase is $60 million and the federal grant would cover 80% of that cost.

IndyGo is relying on the grant for the project.

If the grant is not approved, IndyGo is prepared to apply again.

As for the remaining 20% of construction costs, Luellen says they will apply for a state grant.

Once the Red Line is up and going, annual operating costs would be covered by property taxes.

Luellen says the Red Line would offer an opportunity for neighborhood revitalization along the route.

“At the rapid transit stops, other communities when they build these types of projects, they see big investments and new, walkable, dense development. Think Mass Ave and Fountain Square. The types of development that we’ve seen come online in the last couple of years, we’re hoping we see that all along the Red Line.”

The first section will have 27 stops, about a half-mile apart, some in dedicated bus lanes.

The buses would be accordion-style electric vehicles, 60 feet long. They would pull into station platforms raised about 18 inches that would be flush with the bus doors for fast boarding. Ticket collectors also would speed boarding, according to our partners at the Indy Star.

Passengers could save time by boarding without having to swipe their passes, and an attendant would scan the passes once passengers are on the bus.

Bicycles would be allowed on the buses and locked in corrals.

The proposed overall project would eventually connect Westfield to Greenwood.

IndyGo will apply for the federal grant to cover 80% of the first phase in September and should get an answer in April.

If approved, construction would start in 2017 and should be completed in 2018.

Here is the public meeting schedule:

• Indiana State Fair Exhibit
o During the Indiana State Fair, from August 7-23, you will have the opportunity to check out an informational display in the Purdue Extension Agriculture and Horticulture building showcasing the Red Line Bus Rapid Transit project.

HENDRICKS COUNTY, Ind. – The Indiana Department of Transportation (INDOT) announced an upcoming rolling slowdown of I-70.

INDOT said the slowdown will be for both directions near the intersection of State Road 39 on Tuesday, October 6 at 4 a.m.

INDIANAPOLIS -- Indianapolis Metropolitan police say a woman died after being shot twice in the head on the west side.

IMPD officers responded to the 2900 block of South Taft around 6:40 a.m. where they found the woman had been shot.

LAS VEGAS (AP) -- A judge in Nevada has approved a total of $800 million in payouts from casino company MGM Resorts International and its insurers to more than 4,400 relatives and victims of the Las Vegas Strip shooting that was the deadliest in recent U.S. history.

Clark County District Court Judge Linda Bell on Wednesday signed off on the deal announced earlier this month that settles dozens of lawsuits on the eve of the third anniversary of the shooting that killed 58 people and injured more than 850 in a crowd of 22,000 at an open-air concert near the Mandalay Bay resort.

Mistakes you should avoid when sending in your absentee ballot

LSU begins research on the impact of everyday product, microplastic

Coronavirus stimulus vote delayed in US House, Mnuchin says agreement reached on checks if there is a deal

Times of sun and clouds Precip: 5%