UPDATE (March 4, 2021)– IMPD announced Tavon Macklin, 21, was arrested on Feb. 26 on a preliminary murder charge. Detectives then arrested John Ziegler, 21, on March 3 for his role in the murder.

INDIANAPOLIS — Indianapolis police are asking for the public’s help finding a pair of murder suspects.

According to the Indianapolis Metropolitan Police Department, the suspects attempted to rob two males in the parking lot of a gas station at 2964 S. Keystone Avenue just before 3 a.m. Sunday. When the victims resisted, one of the suspects took out a handgun and shot him.

Police say the two suspects then got into a light colored four-door sedan with tinted windows and drove off.

IEMS arrived and pronounced the victim dead. He was later identified as 29-year-old Justin White.

Anyone with information about this incident or the individuals pictured should call Crime Stoppers 317-262-TIPS or IMPD Homicide Detectives at 317-327-3475 with information. 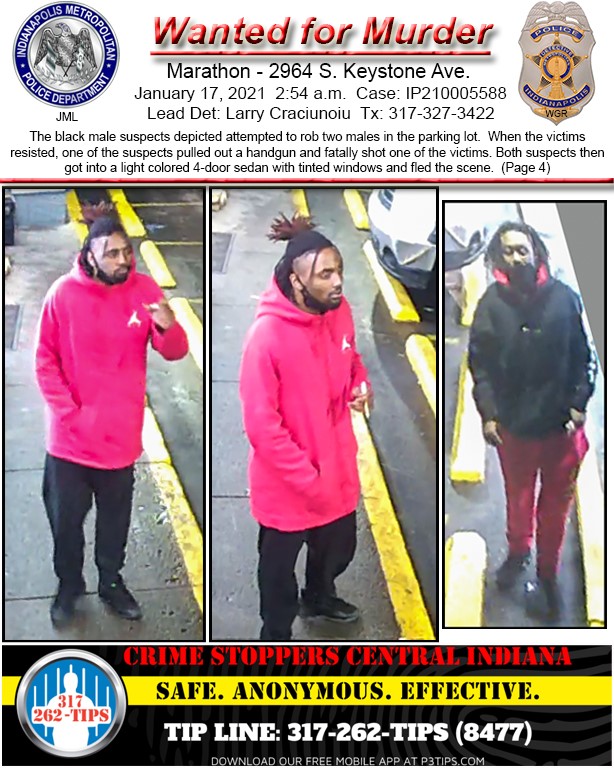 INDIANAPOLIS – An employee at the Marion County Juvenile Center faces charges after putting a juvenile inmate in a chokehold.

According to court documents, the incident happened on Feb. 3, 2021. William Glover had separated a juvenile involved in a fight with two others at the facility.

The shooting occurred around 7 p.m. on Carolina Avenue in the capital city's Washington Park neighborhood, leaving residents rattled. Verdi said three of the victims are currently in critical condition at Rhode Island Hospital.

Chicago Fire Department tweeted out a video of a black cat jumping out of the window of a burning Englewood building Thursday. Miraculously, the black cat landed on its feet and survived.

Vaccination cards not required to go maskless at Indiana restaurants

Officer in Portland suspended among allegations of wrongdoing

Man dies in crash on I-70 in Indianapolis

Officer in Portland suspended among allegations of wrongdoing

Man dies in crash on I-70 in Indianapolis

Vaccination cards not required to go maskless at Indiana restaurants