INDIANAPOLIS — Some unwanted visitors have been spotted on the Monon Trail going through Boad Ripple Ave — cars.

Broad Ripple Avenue from Guilford Ave. to Winthrop Ave. has been closed down since early September for construction. The closure has made some drivers create their own detours through business parking lots and even using the Monon Trail.

One concerned cyclist sent CBS4 pictures of two cars driving down the Monon within days of each other during the last week.

“My first reaction was anger,” said Tyler Brock, the man who sent the pictures. “That was followed by sadness, seeing a car in a space specifically reserved for pedestrians.”

Brock, a school teacher, said he bikes or runs on the Monon through Broad Ripple almost every day. He’s seen drivers on the Monon before but thinks the problems are increasing.

”There have been a lot more issues now because of all the construction that is spanning the Monon,” Brock said.

Police search for driver who ran from two-car crash

Others we talked to along the Monon agreed.

”I’ve seen it,” said Barry Chambers. “You know, somebody tried to turn that way and I’m going this way and I stop and say, ‘Back up, foot trail.’ There is actually people walking on the trail at this point.”

Chambers bikes the Monon through Broad Ripple every day for his job.

With the construction blocking off Broad Ripple Ave, he thinks people are paying too much attention to their GPS and looking to cut around traffic. 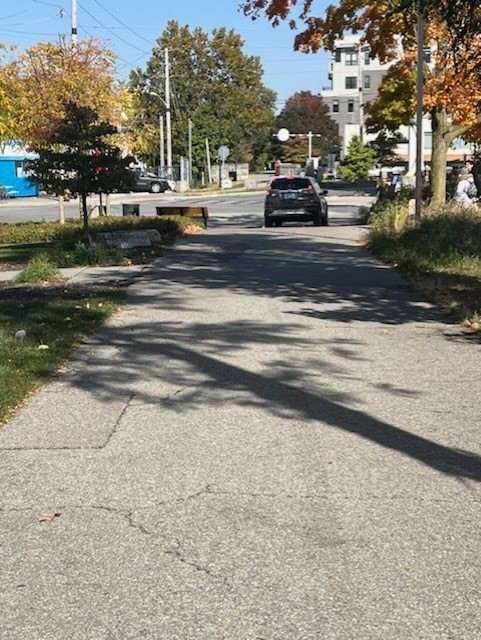 “…they just drive somewhere because they’re looking at their phone, not at their surroundings.”
-Barry Chambers, cyclist that uses the Monon Trail

Workers at businesses on the Monon Trail side of the closure said they see people detouring through their parking lots and the Monon often.

Both Chambers and Brock are looking to see something done.

”That barrel would be perfect, you know, until it gets moved by people,” Chambers said pointing at an orange construction barrel.

We reached out to Indianapolis Department of Public Works with these concerns, a spokesperson said they will place an orange barrel in front of the trail entrances for the time being and will consider a more permanent solution. Here is the full statement.

“Our team has been informed of motor vehicles trespassing on the Monon Trail entrances along Broad Ripple Avenue in order to avoid traffic. There are signs along the Monon Trail that clearly state motor vehicles are not permitted on the trail. This action is illegal and we are continuing to work with IMPD to identify those who trespass. We will, however, place orange barrels in front of the trail entrances as a temporary solution to diverting traffic near the Broad Ripple intersection. With this temporary fix, we will consider a more permanent solution that will prevent residents from accessing the trail with their vehicles, while still allowing access to City vehicles for the purpose of maintenance.”

Brock is hoping for a long lasting fix, like some kind of metal pole preventing cars from driving onto the trail.

”They do make removable bollards that can fold down and then be taken out,” Brock said.

An IMPD spokesperson also said they are monitoring the situation.

“IMPD is aware of this issue. We will have our district cars and IMPD Rangers continue to keep periodic checks on the Monon to resolve this issue,” Public Information Officer William Young said.

DPW said the partial closure of Broad Ripple Ave and construction going on will continue until around the end of the year. The closure will then reopen for the winter until starting back up again in the Spring.

The project on Broad Ripple Ave will last multiple year. It includes stormwater and drainage improvements, pedestrian improvements and a trail connexting the Monon Trail to Broad Ripple Park.

How to maximize days off to get the most from your …

Whether you’re training for a half-marathon or regularly find yourself pumping iron at the gym, recovery should be a part of your routine.

CrossFit gloves are an essential part of fitness training when doing CrossFit. Using them to grip and lift is helpful. Read on for the best CrossFit gloves.

Kids punching bags are an excellent tool due to their interactivity and are also a healthy method for venting their frustrations.

Much colder tonight; a quiet week ahead for central …

Tuesday: The struggle to shut down Indy bars with …

Much colder tonight; a quiet week ahead for central …

1 dead in shooting on Indy’s north side

IU great Jeffries wins a car on ‘The Price Is Right’