INDIANAPOLIS, Ind. — Several interstate projects around Indianapolis are lasting beyond their originally projected completion dates, but the end is in sight, officials with the Indiana Department of Transportation say.

Marion County drivers have spent the last several months driving from one construction zone to the next, with resurfacing and repair projects affecting parts of I-465, I-65, I-70, I-69 and I-865.

“I personally feel like you can’t go anywhere here in town without there being construction of some sort,” said Indianapolis resident Hannah Smith.

“It’s okay if you stay on one side of town,” said Indianapolis resident Charles Garrett. “If you leave and try to go on another side of town, you might get in trouble if you get on the interstate.”

Several of the projects around Indianapolis are extending beyond the completion dates posted to INDOT’s website back in May. According to INDOT’s website, the I-65 and I-70 project from the north split through downtown to Southport Road was originally slated for completion in mid-August. The I-465 southeast project — between I-70 and I-65 — was originally set for an August 21 completion date. Other projects on various parts of I-465 and I-65 were expected to wrap up in mid-October.

Department spokesperson Mallory Duncan says that can be chalked up to mother nature.

“We lost about a month of work in May into June because of all the rain that we got,” Duncan said.

Rain this past weekend put several projects on hold Saturday.

Duncan said INDOT now expects all the interstate projects to wrap up by Thanksgiving, with the majority of the work finishing in mid-November.

INDOT has spent the summer and fall repairing and resurfacing stretches of interstate that were damaged by several winters of harsh weather. Most of the patching and paving work around the interstate system is finished, but contractors are still working on “punch list” items like striping and lane marking. Duncan said the two companies in the area that do interstate striping work can only do so much at a time.

All travel lanes on the interstates around Indianapolis are open during weekdays. Lane restrictions for ongoing work are still being limited to nighttime hours and weekends, according to Duncan.

Duncan says all of the projects are now expected to be finished in mid-November, with the exception of some work on the northeast side of I-465. That work could last until Thanksgiving.

Duncan said INDOT is confident all the work will be finished before winter weather sets in for the season.

“Thank you for your patience,” Duncan said.  “Continue to plan your routes as we go through these next couple weekends.”

“I’m so ready,” Smith said. “It’s a thing here in Indianapolis. We’ve got bad roads. Roads are always being worked on.”

Duncan said the INDOT website for Marion County projects will be updated as lane restrictions and ramp closures are scheduled. You can also follow INDOT East on Twitter and Facebook for updates on the work. 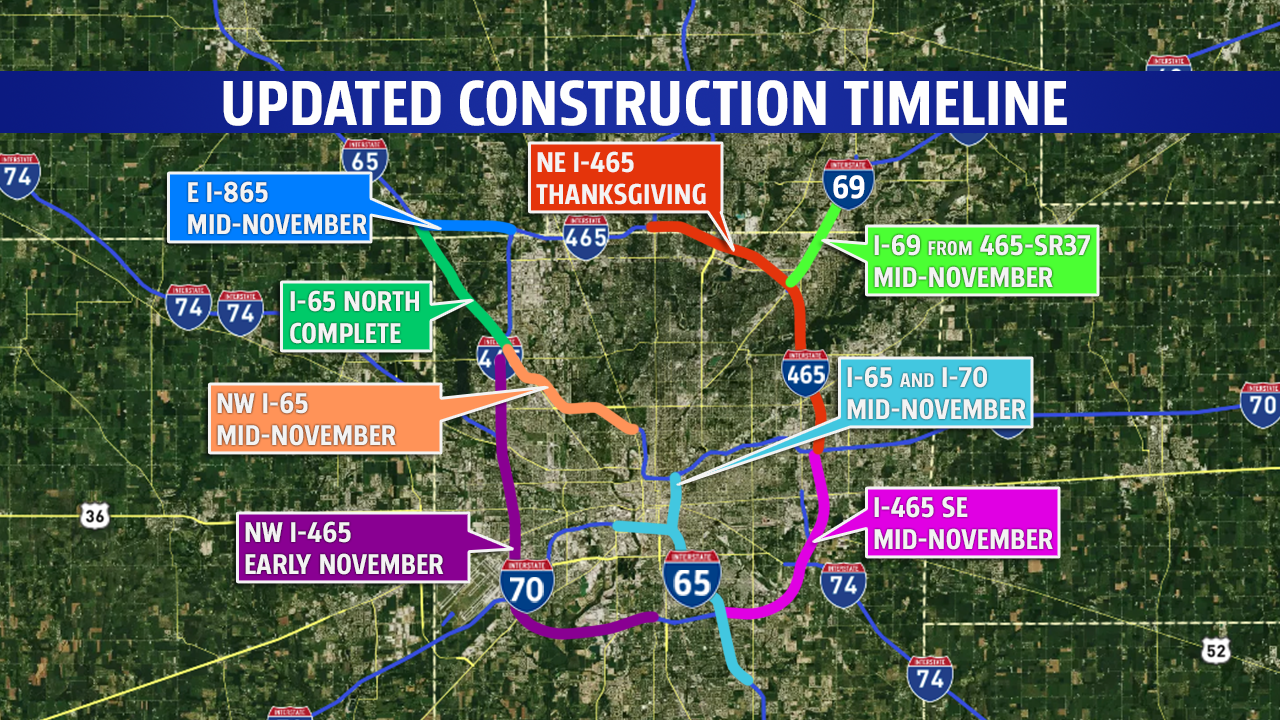 WASHINGTON (NewsNation Now) — Democrats are working to get President Joe Biden's $1.9 trillion coronavirus relief bill passed in the next two weeks, and all attention is on the Senate where the party faces strong Republican opposition.

The House of Representatives narrowly approved the bill to fight the pandemic and boost the economy early Saturday. The American Rescue Plan Act of 2021 passed on a party-line vote of 219 to 212, with two Democrats, Rep. Kurt Schrader of Oregon and Rep. Jared Golden of Maine, voting against the bill.

MUNCIE, Ind. – Muncie police arrested two people in connection with the deadly shooting of a man over the weekend.

Morgan Bell, 26, and Brandon Hodge, 28, face charges of murder and conspiracy to commit murder in the death of 33-year-old Robert Eugene Scott III.

The Bentonville-based retailer currently offers Express delivery — which allows orders to be delivered to customers within two hours — in nearly 3,000 stores.

Send us your questions for Indiana’s congressional delegation for our special town hall: ‘IN Focus: Path out of the Pandemic’

Indiana councilman apologizes for appearing in blackface for Halloween costume