INDIANAPOLIS, Ind. – Indiana Attorney General Curtis Hill filed a legal document Friday asking the Marion Superior Court to grant a final judgment in the state’s favor in regards to a lawsuit filed by a pot-smoking church.

The First Church of Cannabis filed the lawsuit against the City of Indianapolis and the state in 2015, claiming laws against possession and use of marijuana infringe on its religious beliefs. The suit claims members believe marijuana “brings us closer to ourselves and others.”

The attorney general’s office says the pro-marijuana plaintiffs began calling themselves a church in order to poke fun at Indiana’s Religious Freedom Restoration Act (RFRA), which they opposed.

Attorney General Hill says this case is a story of a political crusade turned legal stunt.

“RFRA was never intended to protect illegal conduct masquerading as religious faith,” said Hill. “Even if this were a bona fide religion in which the plaintiffs sincerely believed, the state’s compelling interest in protecting public health and safety from the dangers of drug abuse would override the plaintiffs’ desire to treat marijuana as some kind of sacrament.” 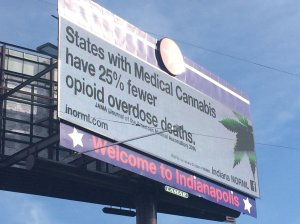 The attorney general has made his stance against marijuana-derived substances quite clear over the past year. In an op-ed, he said “legalizing marijuana is a road to nowhere good.” In November, he also clarified the state’s law regarding the use of cannabidoil (CBD oil). He said it is illegal to sell or possess in Indiana–with the only exception being people with epilepsy conditions specifically outlined in legislation.

In early December, several Indiana officials discussed their stance against the legalization of marijuana during a press conference.

Meanwhile, other groups continue to push for medical marijuana in the state. The Indiana American Legion wants medical marijuana for use by veterans as a treatment option, and Indiana NORML put up a billboard in Indianapolis.

INDIANAPOLIS -- Homeowners in a Camby neighborhood are pooling their surveillance cameras together in the hopes of catching two thieves. The pair is responsible for a string of car break-ins and a stolen vehicle.

"As soon as it’s locked they go to another car," details theft victim James McCartney.

1 dead, another injured in shooting on Indy’s northeast side

INDIANAPOLIS -- A double shooting that left 1 dead is under investigation on Indy's northeast side.

According to the Indianapolis Metropolitan Police Department, the shooting occurred around 10:45 p.m. Friday in the 3900 block of Breen Drive in an area near Post Road and 38th Street.

INDIANAPOLIS, Ind. -- Tragically, hundreds of people have been killed in Indy already this year. To combat this heartache, we are working to connect our hurting community to resources, especially our youth.

Fortunately, Indy has many programs available for our young people. But, more committed adults are needed to serve as mentors.

US vows to pay relatives of Afghans killed in drone strike

2 people shot on Indy’s east side

Working from home? Here’s some cybersecurity tips for remote employees

Why parents are choosing not to post their kids photos online

Woman arrested in Carmel for rape of special needs minor

Where to go for Fall Fun!

When can I trick or treat this year?

1 dead, another injured in shooting on Indy’s northeast side

US vows to pay relatives of Afghans killed in drone strike

2 people shot on Indy’s east side