Skip to content
Live Now
Live Now
Members of the White House COVID-19 taskforce provide their daily briefing
This is an archived article and the information in the article may be outdated. Please look at the time stamp on the story to see when it was last updated.

INDIANAPOLIS, Ind. — One of the country’s biggest horror conventions returns to downtown Indianapolis at a new location.

The Indiana Convention Center (100 South Capitol Avenue) is the new home of HorrorHound Weekend which starts Friday, September 6 and runs through Sunday, September 8. 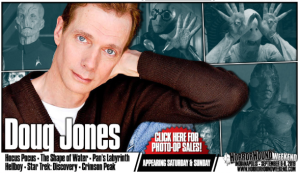 Hosted by HorrorHound magazine, the convention boasts another huge list of celebrity guests, vendors, panels and a film festival.

According to a HorrorHound release, this year’s list of guests include several cast members from the Scream and Saw film franchises.

The Shape of Water and Star Trek: Discovery star will also visit the FOX59 studio on Sunday morning, September 8.

Photo-Ops Everywhere! — Patrick Wilson and Carla Gugino from the Watchmen film will also be in attendance, and HorrorHound said be sure not to miss photo opportunities with scream queen Elvira and Christine – a 1958 Plymouth Belvedere from the 1983 Stephen King film.

Shut up and take my money! — Attendees can expect vendor tables stacked with magazines, toys and Blu-rays, as well as custom decor from stickers and placards to figurines and screen prints.

Getting ready for Halloween? —  HorrorHound said there’s an entire wing of the showroom floor devoted to masks, makeup and prosthetics called Maskfest that lists over 100 vendors in “the most astounding monster-maker event of the year.”

There’s always music in the air — This year’s Indianapolis event features An Evening with Henry Rollins on Friday night, a Saturday night concert of John 5 and the Creatures, and Anthrax legends Scott Ian and Charlie Benante will be signing on the showroom floor all weekend.

A complete list of celebrity guests and events can be found here including after-hours movie screenings and parties for the night owls.

Children 12 and under get in free.

Tickets are available at the door, based on venue capacity. For pre-sale information and ticket pricing click here.

As the number of infections has grown to more than 1.1 million worldwide, health care systems are straining under the surge of patients and lack of medical equipment like ventilators, protective masks and gloves. All of which has heightened concerns about the exposure of hospital personnel.

In the U.S., governors are describing in stark terms the dog-eat-dog global marketplace they must navigate for the protective gear doctors, nurses and other front-line medical workers need as they brace for an expected wave of patients afflicted with severe cases of the new coronavirus.

INDIANAPOLIS, Ind. -- The Indianapolis Metropolitan Police Department is investigating after a woman was critically injured in a shooting Saturday afternoon.

The IMPD said officers responded to the 2100 block of North Shadeland Avenue just after 1 p.m. Saturday on a report of a person shot. When police arrived, they found a woman suffering from apparent gunshot wound(s).

A roundup of some of the most popular but completely untrue stories and visuals of the week. None of these are legit, even though they were shared widely on social media. The Associated Press checked them out. Here are the facts:

CLAIM: Eating alkaline foods will stave off the novel coronavirus, which has a pH level of 5.5 to 8.5.THE FACTS: A false post circulating on social media claims that COVID-19 has a pH level between 5.5 to 8.5, and in order to fend off the virus people must consume alkaline foods. Both points are false. First, a virus does not have a pH level. Second, the body's pH levels cannot be changed through diet. "A virus itself does not have a pH," said Sarah Stanley, associate professor of infectious diseases and vaccinology at the University of California, Berkeley School of Public Health. Stanley explained in an email that "pH is something that applies to a water based solution, which a virus is not." In addition, she said, it's not possible for diet to change the pH of blood, cells or tissues. The body regulates pH levels; it's not something a person would want to change. "Eating a healthy and balanced diet supports immunity and can be helpful for fighting off infections. However, there is no evidence that consuming alkaline foods specifically is beneficial," she said. The post cites the "Journal of Virology & Antiviral Research" and states: "This is to inform us all that the pH for corona virus varies from 5.5 to 8.5. All we need to do, to beat coronavirus, we need to take more of an alkaline foods that are above the pH level of the virus." It lists a number of foods to fight off the novel coronavirus, including lemons, limes and pineapples, but the pH levels provided for them are incorrect. For example, it gives a pH level of 9 for lemons and a level of 9.2 for limes, when both have a pH of about 2, a food science specialist noted. "These pH values for these foods are completely wrong," Donald Schaffner, extension specialist in food science at Rutgers University, told the AP. "The human body is designed to be really good at maintaining its pH." Schaffner said people should eat those foods if they want, but "the best way to keep from getting a virus is to stay away from people."