On Nov. 24, 1938, NBA Hall of Fame player Oscar Robertson is born. Nicknamed “The Big O,” he grew up in Indianapolis and attended Crispus Attucks High School. The point guard played for the Cincinnati Royals and Milwaukee Bucks – and ranks fourth among NBA career free throw scoring leaders by total free throws made (7,694). He is celebrating his 80th birthday today, just months after receiving an NBA Lifetime Achievement Award. 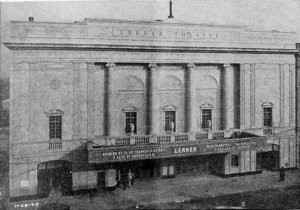 On Nov. 24, 1924, the Lerner Theater opens in Elkhart (see photo on left), featuring vaudeville acts and big bands as well as motion pictures. The beautiful theater was carefully renovated a few years ago and continues to be a popular entertainment venue. (Source: Hoosier History Highlights from the Indiana Department of Administration; Photo credit: EveryStockPhoto: CharmaineZoe’s Marvelous Melange)

In 1784, Zachary Taylor, the 12th president of the United States, was born in Orange County, Virginia.

In 1859, British naturalist Charles Darwin published “On the Origin of Species,” which explained his theory of evolution by means of natural selection.

In 1917, nine members of the Milwaukee police department and two civilians were killed when a bomb exploded inside a police station. (The suspicious-looking package was brought to the station by a local resident after it was discovered outside a church; anarchists were suspected, but the culprits were never caught.)

In 1944, during World War II, U.S. bombers based on Saipan attacked Tokyo in the first raid against the Japanese capital by land-based planes.

In 1947, a group of writers, producers and directors that became known as the “Hollywood Ten” was cited for contempt of Congress for refusing to answer questions about alleged Communist influence in the movie industry. John Steinbeck’s novel “The Pearl” was first published.

In 1971, a hijacker calling himself “Dan Cooper” (but who became popularly known as “D.B. Cooper”) parachuted from a Northwest Orient Airlines 727 over the Pacific Northwest after receiving $200,000 dollars in ransom; his fate remains unknown.

In 1985, the hijacking of an Egyptair jetliner parked on the ground in Malta ended violently as Egyptian commandos stormed the plane. Fifty-eight people died in the raid, in addition to two others killed by the hijackers.

In 1991, rock singer Freddie Mercury died in London at age 45 of AIDS-related pneumonia.

In 1992, a China Southern Airlines Boeing 737 crashed in southern China, killing all 141 people on board.

In 1993, Congress gave its final approval to the Brady handgun control bill.

In 1995, in Ireland, the voters narrowly approved a constitutional amendment legalizing divorce.

In 2007, a fast-moving wildfire pushed by Santa Ana winds raced through the canyons and mountains of Malibu, California, for the second time in little more than a month, destroying some 50 homes.

In 2012, fire raced through a garment factory in Bangladesh that supplied major retailers in the West, killing 112 people; an official said many of the victims were trapped because the eight-story building lacked emergency exits.

In 2016, a Northern California woman, Sherri Papini, was found near an interstate three weeks after disappearing while jogging; Papini told police she had been abducted at gunpoint by two women in a case that has baffled investigators.

MARION COUNTY, Ind. – A man trying to get a minor teenage arrest charge off his record found out he had more serious charges on his records. Charges that he never committed.

When David Shirrell hired an attorney to expunge his record of a minor teenage arrest charge so he could get a gun permit, he didn’t expect the lawyer to tell him about additional charges.

Voter registration site on Indy’s near east side opens: ‘Their voices are just as important’

Bus-size asteroid to zoom past Earth

Walmart to add 20,000 seasonal jobs. Here’s how you can apply

Shooting on near northeast side leaves 1 person critically injured

1 officer indicted in Breonna Taylor case; not for her death