On Nov. 21, 1925, the Old Oaken Bucket is introduced as a prize in the annual football match-up of Indiana University and Purdue. According to an account in the Chicago Tribune, the Bucket was used by Confederate General John Hunt Morgan during his raids into Indiana and Ohio in July 1863. However, IU History Professor James Madison says he believes this story is likely untrue, and is probably “an attempt to make the Bucket more precious by connecting it to a historical event that has some sort of mystique.” (Source: Purdue.edu)

On Nov. 21, 1931, USC ends Notre Dame’s 26-game winning streak, which had stretched back to 1928. The game ranks as one of the most fabled battles in this great inter-sectional rivalry in college football as USC overcame Notre Dame 16-14 in South Bend for the first time thanks to a Johnny Baker game-winning field goal. (See highlights below)

On Nov. 21, 1848, the Indianapolis Hospital for the Insane admits its first five patients. At that time, the hospital consisted of one brick building situated on a large parcel of land of over 100 acres on Washington Street, west of downtown Indianapolis. Later it would be known as Central State Hospital and grow to care for nearly 3,000 patients. The facility closed in 1994 and is now the home of the quirky Indiana Medical History Museum. (Source: Wikipedia) 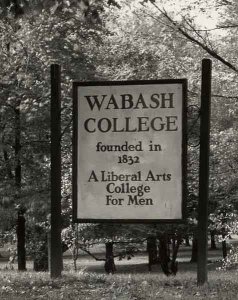 In 1789, North Carolina became the 12th state to ratify the U.S. Constitution.

In 1922, Rebecca L. Felton, a Georgia Democrat, was sworn in as the first woman to serve in the U.S. Senate; her term, the result of an interim appointment, ended the following day as Walter F. George, the winner of a special election, took office.

In 1927, picketing strikers at the Columbine Mine in northern Colorado were fired on by state police; six miners were killed.

In 1931, the Universal horror film “Frankenstein,” starring Boris Karloff as the monster and Colin Clive as his creator, was first released.

In 1967, President Lyndon B. Johnson signed the Air Quality Act.

In 1969, the Senate voted down the Supreme Court nomination of Clement F. Haynsworth, 55-45, the first such rejection since 1930.

In 1979, a mob attacked the U-S Embassy in Islamabad, Pakistan, killing two Americans.

In 1985, U.S. Navy intelligence analyst Jonathan Jay Pollard was arrested, accused of spying for Israel. (Pollard later pleaded guilty to espionage and was sentenced to life in prison; he was released on parole on Nov. 20, 2015.)

In 1992, a three-day tornado outbreak that struck 13 states began in the Houston area before spreading to the Midwest and eastern U.S.; 26 people were killed. Sen. Bob Packwood, R-Ore., issued an apology but refused to discuss allegations that he’d made unwelcome sexual advances toward ten women over the years. (Faced with a threat of expulsion, Packwood ended up resigning from the Senate in 1995.)

In 1995, Balkan leaders meeting in Dayton, Ohio, initialed a peace plan to end three and a-half years of ethnic fighting in Bosnia-Herzegovina.

In 1997, U.N. arms inspectors returned to Iraq after Saddam Hussein’s three-week standoff with the United Nations over the presence of Americans on the team.

In 2001, Ottilie Lundgren, a 94-year-old resident of Oxford, Conn., died of inhalation anthrax; she was the apparent last victim of a series of anthrax attacks carried out through the mail system.

Ten years ago: Wall Street staged a comeback, with the major indexes jumping more than 5 percent and the Dow Jones industrials surging nearly 500 points. Somali pirates released a hijacked Greek-owned tanker, MV Genius, with all 19 crew members safe and the oil cargo intact after payment of a ransom. (The ship had been seized almost two months earlier.) Madonna and Guy Ritchie were granted a preliminary decree of divorce by a London court.

Five years ago: Sweeping aside a century of precedent, Democrats took a chunk out of the Senate’s hallowed filibuster tradition, clearing the way for speedy confirmation of controversial appointments made by President Barack Obama; Republicans warned Democrats would regret their actions once political fortunes were reversed and they could no longer block appointments made by a GOP president. Fifty-four people were killed in a supermarket roof collapse in Riga, Latvia. Three women were freed after being held captive 30 years in a south London home.

One year ago: President Donald Trump, who’d been silent for more than a week about the sexual assault allegations against Alabama Republican Senate candidate Roy Moore, discounted those allegations and said voters must not support Moore’s “liberal” rival. Former teen pop idol David Cassidy, star of the 1970s sitcom “The Partridge Family,” died at the age of 67; he’d announced earlier in the year that he had been diagnosed with dementia. Zimbabwe’s 93-year-old president Robert Mugabe resigned; he was facing impeachment proceedings and had been placed under house arrest by the military.

FORT WORTH, Texas — A prosecutor said a retired Air Force officer who was part of the mob that stormed the U.S. Capitol carried plastic zip-tie handcuffs because he meant “to take hostages.”

Mattel, Barbie's parent company, said Thursday the doll is part of its Inspiring Women Series, as well as its initiative to “spotlight more Black role models.”

TERRE HAUTE, Ind. (AP) — The U.S. government executed a drug trafficker Thursday for slaying seven people in a burst of violence in Virginia’s capital in 1992, with some witnesses in the death-chamber building applauding as the 52-year-old was pronounced dead.

Corey Johnson's execution went ahead after his lawyers scrambled to stop it on grounds that the lethal injection of pentobarbital would cause him excruciating pain due to lung damage from his coronavirus infection last month.

While You Were Sleeping: Coronavirus updates for January 15

US unemployment claims jump to 965,000 as virus takes toll

‘You guys saved my life’: nurse grateful after strangers pull her from wreck in Pendleton

‘I should have known better’: Hoosier warns about online retailer after she ends up stuck with $1,500 of merchandise

While You Were Sleeping: Coronavirus updates for January 15