On Dec. 5, 1955, Elvis Presley performs at The Lyric Theater in Indianapolis, just two months before his first single “Heartbreak Hotel” would be released, and less than a year before his historic hip-swiveling first appearance on the “Ed Sullivan Show” on CBS television. (Source: IndyStar)

On Dec. 5, 1861, the 48th Indiana Infantry Regiment is organized at Goshen by former Indiana Congressman Norman Eddy, who receives a commission as a colonel and becomes its commander. The regiment served a three-year enlistment in the Union Army during the Civil War. The original strength of the regiment was roughly 1,000. (Photo credit: Wikimedia Commons/Public Domain)

On Dec. 5, 1903, the Indiana High School Athletic Association (IHSAA) is organized by high school principals across the state. Their objective would be to promote wholesome sports which would contribute to the total education of all students. (Source: Hoosier History Highlights from the Indiana Department of Administration) 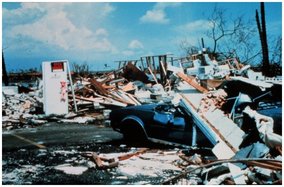 On Dec. 5, 1992, workmen from the First Baptist Church of Hope and the Rock Creek Baptist Church in Westport travel to Miami, Florida to help restore homes for Hurricane Andrew victims, who dub them “a band of angels.” (Photo credit: NOAA/National Weather Service collection) 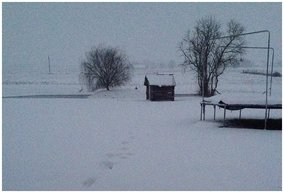 On Dec. 5, 2013, the start of a two-day winter storm that would bring up to a foot of snow in southern parts of central Indiana along with some ice, making driving treacherous and leading to at least two deadly traffic crashes. Numerous schools and businesses would also shut down due to the storm. (Photo: CBS4 file)

In 1776, the first scholastic fraternity in America, Phi Beta Kappa, was organized at the College of William and Mary in Williamsburg, Va.

In 1782, the eighth president of the United States, Martin Van Buren, was born in Kinderhook, New York; he was the first chief executive to be born after American independence.

In 1848, President James K. Polk triggered the Gold Rush of `49 by confirming that gold had been discovered in California.

In 1901, movie producer Walt Disney was born in Chicago.

In 1932, German physicist Albert Einstein was granted a visa, making it possible for him to travel to the United States.

In 1933, national Prohibition came to an end as Utah became the 36th state to ratify the 21st Amendment to the Constitution, repealing the 18th Amendment.

In 1945, five U.S. Navy torpedo bombers mysteriously disappeared after taking off from Fort Lauderdale, Florida, on a training mission with the loss of all 14 crew members; “The Lost Squadron” contributed to the legend of the Bermuda Triangle.

In 1952, the Great Smog of London descended on the British capital; the unusually thick fog, which contained toxic pollutants, lasted five days and was blamed for causing thousands of deaths.

In 1988, a federal grand jury in North Carolina indicted PTL founder Jim Bakker and former aide Richard Dortch on fraud and conspiracy charges. (Bakker was convicted on all counts; Dortch pleaded guilty to four counts and cooperated with prosecutors in exchange for a lighter sentence. Bakker was initially sentenced to 45 years in prison; the term was eventually reduced to eight years, and he served a total of about five.)

In 1994, Republicans chose Newt Gingrich to be the first GOP speaker of the House in four decades.

Ten years ago: The Labor Department reported that an alarming half-million jobs had vanished in Nov. 2008 as unemployment hit a 15-year high of 6.7 percent. A judge in Las Vegas sentenced O.J. Simpson to 33 years in prison (with eligibility for parole after nine) for an armed robbery at a hotel room. (Simpson was released to parole on Oct. 1, 2017.) Death claimed actresses Nina Foch at age 84 and Beverly Garland at age 82.

One year ago: Democratic congressman John Conyers of Michigan resigned from Congress after a nearly 53-year career, becoming the first Capitol Hill poitician to lose his job amid the sexual misconduct allegations sweeping through the nation’s workplaces. In a bitterly contested runoff election, Atlanta voters narrowly chose Keisha Lance Bottoms as the city’s next mayor; a result that would be upheld after a recount requested by rival Mary Norwood. The International Olympic Committee barred Russia and its sports leaders from the upcoming Winter Olympics in South Korea after concluding that members of the Russian government concocted a doping scheme at the 2014 Sochi Games; some Russians would be able to compete as “Olympic Athletes from Russia.”

October is prime time for flu vaccinations, and the U.S. and Europe are gearing up for what experts hope is high demand as countries seek to avoid a “twindemic” with COVID-19.

“Take flu out of the equation this fall,” said Dr. Daniel Jernigan of the U.S. Centers for Disease Control and Prevention.

A Subway franchisee in Ireland lost a taxation case after the Supreme Court ruled that the sandwich bread had too much sugar to meet the legal definition of bread, according to the Irish Independent.

Bread, which is considered a "staple" food under the country's laws, has a zero value-added tax.

XFL football set to return in spring of 2022

XFL football set to return in spring of 2022