On Dec. 30, 2010, a magnitude 3.8 earthquake occurs at 7:55 a.m. centered about 15 miles east/southeast of Kokomo, in a cornfield between the towns of Greentown and West Liberty.
(See Google map, below right, showing epicenter) 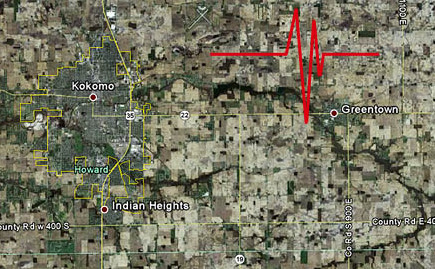 The Indiana Geological Survey says the “extremely rare and unprecedented” earthquake had the largest magnitude of a central Indiana earthquake in 175 years. There were reports of minor damage, but no injuries or deaths stemming from the seismic event, which lasted only a few seconds. However, thousands of residents in Indiana, Ohio, Kentucky, Illinois, and Michigan reported feeling shaking from the moderate earthquake. “It was like a huge explosion under your feet,” Debra Sholty, the owner of Hobson Cleaners in Kokomo, told CNN at the time. (Watch a portion of CNN’s quake coverage below.)

In 1853, the United States and Mexico signed a treaty under which the U.S. agreed to buy some 45,000 square miles of land from Mexico for $10 million in a deal known as the Gadsden Purchase.

In 1860, 10 days after South Carolina seceded from the Union, the state militia seized the United States Arsenal in Charleston.

In 1916, Grigory Rasputin, the so-called “Mad Monk” who wielded considerable influence with Czar Nicholas II, was killed by a group of Russian noblemen in St. Petersburg.

In 1922, Vladimir Lenin proclaimed the establishment of the Union of Soviet Socialist Republics, which lasted nearly seven decades before dissolving in December 1991.

In 1936, the United Auto Workers union staged its first “sit-down” strike at the General Motors Fisher Body Plant No. 1 in Flint, Michigan. (The strike lasted until Feb. 11, 1937.)

In 1942, a near-riot of bobby-soxers greeted the opening of Frank Sinatra’s singing engagement at the Paramount Theater in New York’s Times Square.

In 1965, Ferdinand Marcos was inaugurated for his first term as president of the Philippines.

In 1989, a Northwest Airlines DC-10, which had been the target of a telephoned threat, flew safely from Paris to Detroit with 22 passengers amid etra-tight security.

In 1997, a deadly massacre in Algeria’s insurgency began in four mountain villages as armed men killed women and children in an attack that lasted from dusk until dawn the following morning; up to 412 deaths were reported.

In 1999, former Beatle George Harrison fought off a knife-wielding intruder who’d broken into his mansion west of London and stabbed him in the chest. (The attacker was later acquitted of attempted murder by reason of insanity.)

Ten years ago: A defiant Illinois Gov. Rod Blagojevich (blah-GOY’-uh-vich) named former state Attorney General Roland Burris to Barack Obama’s Senate seat, a surprise move that put the governor’s opponents in the uncomfortable position of trying to block his choice from becoming the Senate’s only black member. (Burris was sworn in as a U.S. senator the following month.) Israeli aircraft kept up a relentless string of attacks on Hamas-ruled Gaza, smashing a government complex, security installations and the home of a top militant commander. Russian President Dmitry Medvedev signed a law extending presidential terms from four years to six.

One year ago: A wave of spontaneous protests over Iran’s weak economy swept into Tehran, with college students and others chanting against the government. Forecasters issued winter weather advisories across much of the Deep South ahead of plunging temperatures expected as the new year arrived.

INDIANAPOLIS – A former state senator and U.S. congressional candidate has been indicted on multiple charges.

BARTHOLOMEW COUNTY, Ind. -- The Bartholomew County Sheriff is asking the public to help find a person if interest in a death investigation.

The sheriff said an investigation into the death of a woman found in a home Monday is underway.

LOUISVILLE, Ky. (AP) — Kentucky’s attorney general has agreed to release the recordings of the secret grand jury proceeding that considered charges against three officers involved in the fatal shooting of Breonna Taylor.

Attorney General Daniel Cameron agreed to the release hours after a member of the grand jury sued to have the record of the proceedings opened to the public.

US census to end October 5, despite court order

Shooting leads to crash on east side; 2 people seriously injured