On Dec. 22, 1989, Indianapolis records its coldest temperature ever recorded in December, -23 degrees, according to data from the National Weather Service.

On Dec. 22, 1948, over 1,400 children pack the Indiana Statehouse for a Christmas party sponsored by state employees and the Salvation Army. Santa Claus and Governor Ralph Gates handed out toys of all kinds to the kids. The top gift was a three-foot doll donated by actress Shirley Temple. (Source: Hoosier History Highlights from the Indiana Department of Administration; Image credit: State of Indiana) 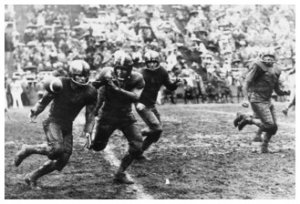 On Dec. 22, 1956, St. Joseph’s College of Indiana takes on Montana State College in the Aluminum Bowl, a one-time postseason college football bowl game played at War Memorial Stadium in Little Rock, Arkansas. It was the championship game for the National Association of Intercollegiate Athletics, which governs sports programs at smaller schools. It was notable for being the first racially integrated college football game played in the state of Arkansas. The muddy game was broadcast on CBS television and radio stations, but ended in a scoreless tie. (Photo credit: Central Arkansas Library System)

In 1894, French army officer Alfred Dreyfus was convicted of treason in a court-martial that triggered worldwide charges of anti-Semitism. (Dreyfus was eventually vindicated.)

In 1917, Mother Frances Xavier Cabrini, who later became the first naturalized U.S. citizen to be canonized, died in Chicago at age 67.

In 1937, the first, center tube of the Lincoln Tunnel connecting New York City and New Jersey beneath the Hudson River was opened to traffic. (The second tube opened in 1945, the third in 1957.)

In 1944, during the World War II Battle of the Bulge, U.S. Brig. Gen. Anthony C. McAuliffe rejected a German demand for surrender, writing “Nuts!” in his official reply.

In 1968, Julie Nixon married David Eisenhower in a private ceremony in New York.

In 1977, three dozen people were killed when a 250-foot-high grain elevator at the Continental Grain Company plant in Westwego, Louisiana, exploded.

In 1984, New York City resident Bernhard Goetz shot and wounded four youths on a Manhattan subway, claiming they were about to rob him.

In 1989, Romanian President Nicolae Ceausescu (chow-SHES’-koo), the last of Eastern Europe’s hard-line Communist rulers, was toppled from power in a popular uprising. Playwright Samuel Beckett died in Paris at age 83.

In 1991, the body o Marine Lt. Col. William R. Higgins, an American hostage slain by his terrorist captors, was recovered after it had been dumped along a highway in Lebanon.

In 1992, a Libyan Boeing 727 jetliner crashed after a midair collision with a MiG fighter, killing all 157 aboard the jetliner, and both crew members of the fighter jet.

In 2001, Richard C. Reid, a passenger on an American Airlines flight from Paris to Miami, tried to ignite explosives in his shoes, but was subdued by flight attendants and fellow passengers. (Reid is serving a life sentence in federal prison.) Hamid Karzai (HAH’-mihd KAHR’-zeye) was sworn in as prime minister of Afghanistan’s interim government.

Ten years ago: Five Muslim immigrants accused of scheming to massacre U.S. soldiers at Fort Dix were convicted of conspiracy in Camden, N.J. (Four were later sentenced to life in prison; one received a 33-year sentence.) Toyota projected its first operating loss in 70 years due to the global economic slowdown. The president of Guinea, Lansana Conte, died nearly a quarter of a century after seizing power in a coup; he was believed to be in his 70s.

Five years ago: Mikhail Khodorkovsky (mih-hah-EEL’ khoh-dohr-KAHV’-skee), the Russian oligarch who’d crossed President Vladimir Putin and ended up in jail for 10 years, told a press conference in Berlin that he planned to devote his life to securing the release of the country’s political prisoners. President Barack Obama and the vacationing first family temporarily skipped the beach in Hawaii to attend the Oregon State-Akron game at the Diamond Head Classic tournament in Honolulu. (Oregon State, coached by first lady Michelle Obama’s brother, Craig Robinson, lost to Akron, 83-71.)

One year ago: The wildfire that had burned its way through communities and wilderness northwest of Los Angeles became the largest blaze ever officially recorded in California; it had scorched 273,400 acres and destroyed more than 700 homes. IPhone owners from several states sued Apple for not diclosing sooner that it issued software updates deliberately slowing older-model phones so aging batteries would last longer. President Donald Trump signed the $1.5 trillion tax overhaul into law. The U.N. Security Council unanimously approved tough new sanctions against North Korea in response to its latest launch of a ballistic missile that Pyongyang said was capable of reaching anywhere on the U.S. mainland.

LAWRENCE, Ind. -- Lawrence Police have shined a spotlight on the murder of Jeremy Seldomridge and unveiled a sketch of the person they believe witnessed his murder on November 28, 2020, near the intersection of E. 50th Street and N. Franklin Road.

"In this case, there isn't a lot of video, surveillance footage available, so you want to utilize every tool that you have at your disposal," Dep. Chief Gary Woodruff said.

GOSHEN, Ind. -- Police in Goshen are investigating the disappearance of a man and are now asking the public for information to help locate him.

A Silver Alert has now been issued for 82-year-old James Coble of Goshen.

INDIANAPOLIS -- Robin Staten-Lanier is a hometown girl, who proudly hails from Indy's westside.

"It born, bred and raised me," she said, "So I’m just excited today to bring something home.”

Central Indiana will see a chance for measurable snow this weekend

Indy man arrested in deadly hit-and-run on I-70

Inside the $14 million DeHaan house for sale in Indianapolis

Central Indiana will see a chance for measurable snow this weekend