On Dec. 19, 1972, Apollo 17 splashes down in the Pacific, winding up the Apollo program of manned lunar landings. Eugene Cernan, the Commander of Apollo 17, graduated with an engineering degree from Purdue University. When Cernan died last year, Purdue President Mitch Daniels called him a “pioneer in aviation and one of the greatest Boilermakers of all time.” (Watch video of the Apollo 17 splashdown below…)

On Dec. 19, 1888, Gen. Lew Wallace speaks to the Indiana Commandery of the Military Order of the Loyal Legion of the United States at the Inaugural Banquet. The banquet was held at the Bates house in Indianapolis. The Loyal Legion was established after the assassination of President Abraham Lincoln to help ward off future threats to the American Government. Wallace spoke to the group about the possible meanings of the word, “Hoosier.” (Photo credit: State of Indiana/Public Domain) 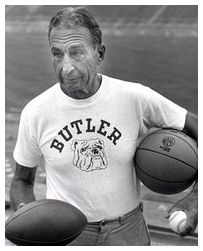 On Dec. 19, 1899, Paul D. “Tony” Hinkle is born in Logansport. He became a legendary coach in football, basketball and baseball, spending nearly 50 years at Butler University. When Hinkle started at Butler in 1921, the campus was still in Irvington. Butler’s basketball arena was renamed as Hinkle Fieldhouse in the coach’s honor in 1966. (Source: Hoosier History Highlights from the Indiana Department of Administration; Photo courtesy: Butler Univ.) 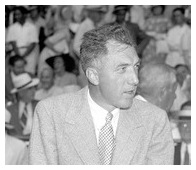 On Dec. 19, 1894, Ford C. Frick is born on a farm in unincorporated Wawaka in Noble County. He would become the third Commissioner of Major League Baseball (MLB) from 1951 to 1965. During Frick’s term as commissioner, expansion occurred and MLB faced the threat of having its antitrust exemption revoked by Congress. He was elected to the Baseball Hall of Fame in 1970. Today, the Ford C. Frick Award recognizes outstanding baseball broadcasters. (Photo credit: Library of Congress) 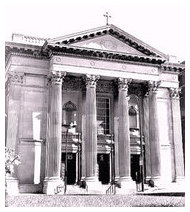 In 1777, during the American Revolutionary War, Gen. George Washington led his army of about 11,000 men to Valley Forge, Pennsylvania, to camp for the winter.

In 1907, 239 workrs died in a coal mine explosion in Jacobs Creek, Pennsylvania.

In 1946, war broke out in Indochina as troops under Ho Chi Minh launched widespread attacks against the French.

In 1950, Gen. Dwight D. Eisenhower was named commander of the military forces of the North Atlantic Treaty Organization.

In 1974, Nelson A. Rockefeller was sworn in as the 41st vice president of the United States in the U.S. Senate chamber by Chief Justice Warren Burger with President Gerald R. Ford looking on.

In 1975, John Paul Stevens was sworn in as an Associate Justice of the U.S. Supreme Court.

In 1986, the Soviet Union announced it had freed dissident Andrei Sakharov from internal exile, and pardoned his wife, Yelena Bonner. Lawrence E. Walsh was appointed independent counsel to investigate the Iran-Contra affair.

In 1998, President Bill Clinton was impeached by the Republican-controlled House for perjury and obstruction of justice (he was subsequently acquitted by the Senate).

In 2001, the fires that had burned beneath the ruins of the World Trade Center in New York City for the previous three months were declared extinguished except for a few scattered hot spots.

In 2002, Secretary of State Colin Powell declared Iraq in “material breach” of a U.N. disarmament resolution.

Ten years ago: Citing imminent danger to the national economy, President George W. Bush ordered an emergency bailout of the U.S. auto industry. An unwavering Illinois Gov. Rod Blagojevich (blah-GOY’-uh-vich) served notice he had no intention of quitting over his corruption arrest, declaring: “I have done nothing wrong.” Militants in Gaza fired rockets into Israel as Hamas ended a six-month truce.

Five years ago: Discount retailer Target announced that data connected to about 40 million credit and debit card accounts had been stolen as part of a breach that began over the Thanksgiving weekend. The ceiling partilly collapsed onto a packed audience at the Apollo Theatre in London, injuring almost 80 people, seven of them seriously. Al Goldstein, 77, the publisher of Screw magazine who smashed down legal barriers against pornography, died in New York.

One year ago: A bus carrying cruise ship passengers on an excursion to Mayan ruins in southeastern Mexico flipped over on a narrow highway, killing 11 travelers and their guide and injuring about 20 others; eight Americans were among those killed. U.S. health officials approved the nation’s first gene therapy for an inherited disease, a treatment that improves the sight of patients with a rare form of blindness. David Wright, a Massachusetts man who was convicted of leading a plot inspired by the Islamic State to behead conservative blogger Pamela Geller, was sentenced in Boston to 28 years in prison.

CLEVELAND (NEXSTAR) -- After months of anticipation, the first debate between President Donald Trump and his Democratic challenger, Joe Biden, is in the books. And as you might imagine, there was no shortage of memorable moments or aggressive interruptions.

While both sides are claiming victory, here are a few of the pivotal moments everyone will be talking about that likely define who had the biggest night.

WASHINGTON (AP) — President Donald Trump and Democratic rival Joe Biden sparred Tuesday in their first of three debates, hoping to sway undecided voters planning to cast ballots by mail and in person in the final weeks leading up to the Nov. 3 election.

A look at how their statements from Cleveland stack up with the facts:

CLEVELAND (AP) — President Donald Trump and Democratic challenger Joe Biden began the first presidential debate with heated exchanges over health care, the coronavirus and the future of the Supreme Court.

Fitting for an edge in their bitter campaign, the two men frequently interrupted each other with angry interjections, with Biden eventually snapping at Trump “Will you shut up, man?” That was after the president badgered him over his refusal to comment on whether he would try to expand the Supreme Court in retaliation if Trump’s high court pick, Amy Coney Barrett, was confirmed to replace the late Justice Ruth Bader Ginsburg.

Crowds out, masks in: Debating in the age of COVID-19

What to expect in the first presidential debate

Are you registered to vote? Here’s how to check

Salty lake, ponds may be gurgling beneath South Pole on Mars

Crowds out, masks in: Debating in the age of COVID-19