On Dec. 14, 1909, the Indy “Brickyard” is completed as workers place the last of 3.2 million 10-pound bricks that pave the Indianapolis Motor Speedway. Since then, most of that brick has been buried under asphalt, but one yard remains exposed at the start-finish line. Kissing those bricks after a successful race remains a tradition that continues today among Indy car drivers. 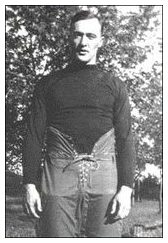 On Dec. 14, 1920, Notre Dame college football player George Gipp, known as “The Gipper,” dies in South Bend of pneumonia at 25-years-old. (Photo of Gipp via Wikimedia.) Gipp’s death came two weeks after being elected Notre Dame’s first All-American. He was the subject of head coach Knute Rockne’s famous “Win just one for the Gipper” speech, which was highlighted in a 1940 film where Gipp was portrayed by then-actor Ronald Reagan. (Watch movie clip below) 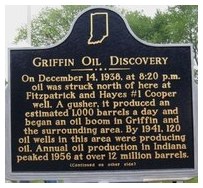 On Dec. 14, 1938, drillers strike oil near the small town of Griffin along the Indiana-Illinois border. The gusher they discovered would produce over 1,000 gallons of crude oil a day and began an oil boom in Griffin. By 1941, 120 oil wells in this area were producing oil. Annual oil production in Indiana peaked in 1956 at over 12 million barrels. (Photo courtesy: state of Indiana) 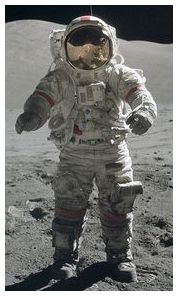 On Dec. 14, 1972, Apollo 17 astronauts Eugene Cernan and Harrison Schmitt conclude their third and final moonwalk and blast off for their rendezvous with the command module. Cernan, who graduated with an engineering degree from Purdue University, is the last (or most recent) person to walk on the moon. (Photo of Cernan walking on the moon courtesy of NASA.) When Cernan died last year, Purdue President Mitch Daniels called him a “pioneer in aviation and one of the greatest Boilermakers of all time.”
(Watch TV coverage of the moonwalk in 1972 below) 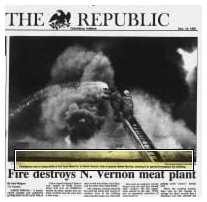 On Dec. 14, 1991, a fire fueled by vats of grease destroys the Ezzo Meat Company plant in North Vernon. Firefighters estimated damage from the blaze to the meat packing facility at roughly $1 million. (Library archive image shows The Republic newspaper front page from the day of the fire)

In 1799, the first president of the United States, George Washington, died at his Mount Vernon, Virginia, home at age 67.

In 1911, Norwegian explorer Roald Amundsen (ROH’-ahl AH’-mun-suhn) and his team became the first men to reach the South Pole, beating out a British expedition led by Robert F. Scott.

In 1916, President Woodrow Wilson vetoed an immigration measure aimed at preventing “undesirables” and anyone born in the “Asiatic Barred Zone” from entering the U.S. (Congress overrode Wilson’s veto in Feb. 1917.)

In 1962, the U.S. space probe Mariner 2 passed Venus at a distance of just over 21,000 miles, transmitting information about the planet, such as its hot surface temperatures and predominantly carbon dioxide atmosphere.

In 1964, the U.S. Supreme Court, in Heart of Atlanta Motel v. United States, ruled that Congress was within its authority to enforce the Civil Rights Act of 1964 against racial discrimination by private businesses (in this case, a motel that refused to cater to blacks).

In 1985, Wilma Mankiller became the first woman to lead a major American Indian tribe as she took office as principal chief of the Cherokee Nation of Oklahoma. Former New York Yankees outfielder Roger Maris, who’d hit 61 home runs during the 1961 season, died in Houston at age 51.

In 1986, the experimental aircraft Voyager, piloted by Dick Rutan and Jeana Yeager, took off from Edwards Air Force Base in California on the first non-stop, non-refueled flight around the world.

In 1988, President Reagan authorized the U-S to enter into a “substantive dialogue” with the Palestine Liberation Organization, after chairman Yasser Arafat said he was renouncing “all forms of terrorism.”

In 2005, President George W. Bush defended his decision to wage the Iraq war, even as he acknowledged that “much of the intelligence turned out to be wrong.”

In 2012, a gunman with a semi-automatic rifle killed 20 first-graders and six educators at Sandy Hook Elementary School in Newtown, Connecticut, then committed suicide as police arrived; the 20-year-old had also fatally shot his mother at their home before carrying out the attack on the school.

Ten years ago: An Iraqi journalist hurled his shoes at President George W. Bush during a news conference in Baghdad; Bush ducked the flying footwear as they whizzed past his head and landed against the wall behind him. (The shoe-thrower, Muntadhar al-Zeidi (MOON’-tuh-dahr ahl-zay-EE’-dee), ended up spending nine months in prison.)

Five years ago: Bells tolled 26 times in Newtown, Connecticut, to honor the dead on the first anniversary of the Sandy Hook school massacre. China carried out the world’s first soft landing of a space probe on the moon in nearly four decades as the unmanned Chang’e 3 lander touched down on the lunar surface. Jameis (cq) Winston won the Heisman Trophy, making the Florida State quarterback the second straight freshman to win the award, after Texas A&M’s Johnny Manziel. Actor Peter O’Toole, 81, who’d achieved instant stardom as Lawrence of Arabia and was nominated eight times for an Academy Award without winning, died in London.

One year ago: The Federal Communications Commission voted to repeal the Obama-era “net neutrality” rules, a move that gave internet service providers a free hand to slow or block specific websites and apps as they see fit, or charge more for faster speeds. The most serious charge against James Alex Fields, accused of driving into a crowd protesting a white nationalist rally in Charlottesville, Virginia, in August, was upgraded to first-degree murder; a 32-year-old woman, Heather Heyer, died and dozens were injured.

Is your information on the dark web? How to find …

Police respond to shooting at Subaru plant in Lafayette

‘She has gone home now for the final time’: Hear …

Ian becomes a major hurricane; a cool, dry week for …

Anderson man accused of stabbing his mother to death

Ian becomes a major hurricane; a cool, dry week for …

Anderson man accused of stabbing his mother to death

Is your information on the dark web?

Smoke detector information that just may save a life