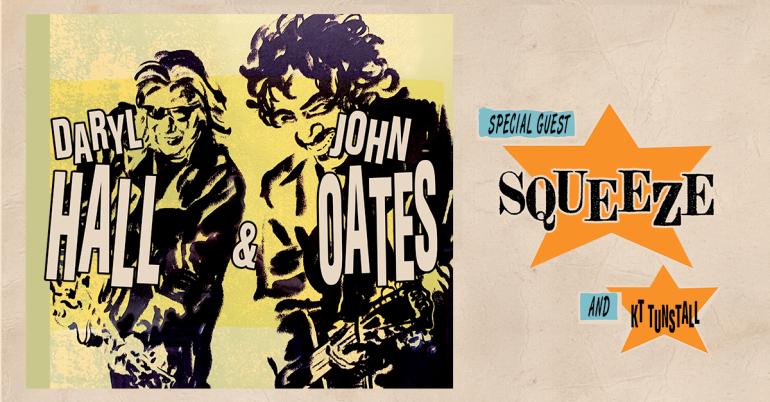 Live Nation said the tour will make a stop at Ruoff Music Center in Noblesville on Wednesday, July 22 as part of the Coors Light Concert Series.

The 2020 tour looks to be another in a long line of incredible shows, as the acclaimed duo has toured with Tears For Fears, Train and Allen Stone in recent years to massive success.

“Can’t wait to get out there and have some fun playing with my friends to all of my friends,” says Hall.

Tunstall said, “How did I get so lucky?! I’m going on a grand adventure across the United States this summer with my legendary friends Hall & Oates, along with incredible Squeeze. Just to see this show is a thrill.”

According to Live Nation, Hall & Oates have sold more albums than any other duo in music history, starting with their debut Abandoned Luncheonette (1973), followed by War Babies (1974).

Oates added, “I’m really looking forward to a big time 2020 tour! Can’t wait to see you all on the road!”

Pre-sales for VIP and general tickets start today and extend through Thursday, January 23 at 10 p.m.

SAN DIEGO (KSWB) - A San Diego woman was reunited with her dog after police say he was stolen and his captor asked for cash in exchange for his return.

Alejandra Casey and her three-year-old dog, Paco, a rescue from Tijuana, were running errands Monday morning at a shopping center in Rancho Bernardo.

INDIANAPOLIS, Ind. - IMPD arrested a man with criminal convictions and two open cases in Marion County after he allegedly pointed a gun at officers, which fortunately did not fire.

IMPD confirms before that incident, a judge lowered Donte Swinton's bond from $30,000 to a mere $500  before he allegedly pointed a gun at officers this month.

INDIANAPOLIS, Ind. – Less than two months into 2020 and the Circle City has already seen more than 30 homicides. We’ve heard people say again and again, they want to do something to stop the violent crime.

A group called BRAG is taking the first step to doing that on the Northeast side by starting their own crime watch groups. The group is holding a meeting tonight to announce plans on how to implement them into their neighborhoods.