ST. PAUL, MN. — News spread this weekend that all 126 Gander Mountain stores would be closing after the company posted a flyer for a “total liquidation sale.”

But Marcus Lemonis, a businessman and TV personality who won a bankruptcy auction for the company last week, is disputing the official announcement, saying not all stores will be closing. He said at least 70 Gander Mountain locations will remain open, including at least two in the Indianapolis area. 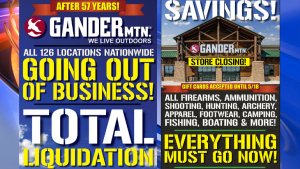 Lemonis bought the Gander Mountain’s assets, intellectual property, trademarks and leases, but he didn’t buy the inventory. A liquidator bought that, so all merchandise at the stores will be on sale.

“So Gander Mountain filed bankruptcy as you know, and about 10 days ago I bought all of the assets, all of the intellectual property, all of the trademarks, all of the leases and the Overton’s business. Except for the fact that I did not buy, intentionally, the inventory that’s in the stores,” Lemonis told IndyStar Sunday morning. “A liquidator bought the inventory that’s in the stores and they have the right to sell that inventory down and out as if it’s going away. But the confusing message is whether a store is staying open or not. And ultimately we control the leases… every single property. And my intention is to keep at least 70 open.”

Lemonis said he is working on re-purchasing inventory, and surviving stores will be restocked and reopened. Stores that experience temporary closures to be restocked should be open by late summer or early fall. He added that customers who have gift cards should use them as soon as possible.

The Gander Mountain website says gift cards will only be accepted until May 18.

It is unclear at this time when stores will close.

What we know about the Herbert Baumeister serial …

How to avoid getting scammed this Giving Tuesday

Most popular baby names for girls in Indiana

Mild Tuesday comes with strong storms in the night

Family of man injured in hit-and-run on Indianapolis …