INDIANAPOLIS, Ind.—The mother of a Franklin Central High School student is speaking out about a teacher who is accused of having an inappropriate sexual relationship with her son.

"It’s an extreme betrayal," said the Franklin Township mother whose initial report led to the IMPD sex crimes investigation. "I’m very disappointed. I’m angry and I’m hurt that it got to this point."

She says after finding evidence of a possible inappropriate relationship between her son and his former algebra teacher, Kathryn Hagan, she immediately went to the Franklin Township Community School Corporation. The district says authorities were contacted immediately and they suspended Hagan. 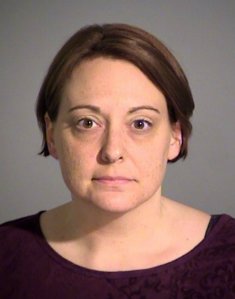 That was April 7. The mother says it felt like it took forever for Hagan to be charged.

She had no idea there was a lot more going on with Hagan and other students than just a possible sexual relationship with her son.

Hagan is facing charges of conspiracy to commit robbery while armed with a deadly weapon, two counts of child seduction, dangerous control of a firearm (providing a firearm to a child) and dealing in a schedule IV controlled substance.

“Last night, when I read the charges I was physically sick. It physically made me ill to read that and know just based on the charges, what possibly could have gone on. And then today to read the probable cause affidavit, it was very emotional for us,” the mother said.

Court documents show in one text, Hagan asked the woman’s son to call in sick to school and meet up at her house for the day. In other texts, she repeatedly calls him “cute” and “super hot.”

Investigators say Hagan also bought a gun for another student, and she told that student to use it to rob other students who may have evidence incriminating Hagan on their phones.

The mother says she`s glad she found evidence and made the report when she did.  If she hadn`t, she`s worried there could have been more student victims. “We will heal. We will get over this. And I just hope that she`s never able to be in a setting with children ever again,” the mother said.

INDIANAPOLIS -- The Indianapolis Metropolitan Police Department is in their second week of distributing body cameras to officers.

These cameras are going to give the public a new perspective of what officers see every single day.

INDIANAPOLIS -- The Indianapolis Metropolitan Police Department is investigating a death on the city's near east side.

The IMPD said officers responded to Jefferson Avenue between East Washington Street and East New York Street just before 8 a.m. Thursday on a death investigation. When they arrived, they found a man dead from apparent trauma.

COLUMBUS, Ind.-- Police arrested a Columbus man Wednesday after police say he was secretly recording clients of his wife, who operated a massage therapy business.

‘Like the Titanic’ – NCAA experts warn of coronavirus spread

Central Indiana will see a better chance for rain this weekend

‘We all have to do our part’: Gov. Holcomb, officials express concern over coronavirus trends