INDIANAPOLIS — It was just before midnight on February 1 when Kathleen Roberts got a text message from her boyfriend Steven Jamell indicating he would see her at their home in the 3700 block of Rockville Road.

But first, apparently, Jamell needed to make a stop at a bank branch nearby.

Three people got out of that car and approached Jamell in his backyard after he exited his garage.

“He was shot twice,” said Roberts. “It either happened in our driveway or in our backyard, but he was found behind the fence of our backyard.

“I have a feeling that some sort of altercation broke out. I don’t know if they had any intention to shoot him, but he wasn’t the type of guy who would just get punked on, and if they tried to rob him, he probably tried to fight back.”

When neighbors came out of their homes to investigate, the killers sprayed gunfire at them as a bullet was lodged in the door frame of the house next door.

IMPD homicide detectives have released still photographs from surveillance cameras that captured the trio speeding away in a dark car. 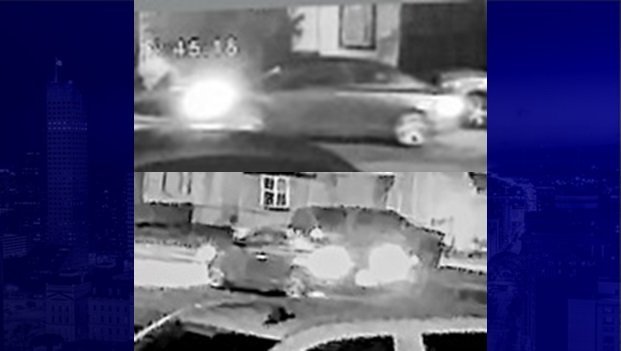 “I know they’re still tracking down leads,” said Roberts, “but with COVID, a lot of places are shut down, and they can’t get what they need in a timely fashion.”

“So his dad is all he had. His mom’s not in the picture. So whoever did this, you just orphaned a 16-year-old kid.”

Jamell was Indianapolis’ 19th homicide victim of the year.

There have been nearly 100 since then as the city races towards a murderous annual record.

“I follow FOX59 and a couple other news stations on my phone,” said Roberts, “and every time there’s a shooting, I get a notification.”

“And I won’t turn it off because I’m just hoping that these people will do it again, and they’ll get caught.”

Friends and family should have been celebrating Jamell’s 43rd birthday on Saturday.

Instead, they were putting together a reward fund for anyone who provides the tip that leads to the arrests and convictions of Jamell’s killers.

As always, Crimestoppers offers a $1,000 reward for the same information.

INDIANAPOLIS -- A man is dead after a shooting at an apartment on Indy's near east side Friday morning.

The Indianapolis Metropolitan Police Department said the shooting happened in the 1000 block of Hosbrook Street just after 11:20 Friday morning. When police arrived, they found a man suffering from an apparent gunshot wound.

INDIANAPOLIS — Police are searching for the person who shot and killed a teen on Indy’s east side early Friday morning.

Just after 1 a.m., IMPD officers responded to Bradley Avenue where they found a teenage boy shot in the neck. The victim staggered down a sidewalk after being shot before he collapsed. That victim, who hasn’t been identified, died after being rushed to the hospital.

INDIANAPOLIS – Indianapolis Metropolitan police say a man targeted gas stations and convenience stores in the Indianapolis area from June through August in a series of robberies.

The IMPD Covert Robbery Unit arrested 51-year-old Damon Smithson early Thursday. The robberies were concentrated on the north and northwest sides of the city.

East side I-465 crash involving pedestrian sends 2 to hospital

Shooting on south side leaves 1 dead, 2 others injured