INDIANAPOLIS, Ind. — Metro police are asking for help locating  a man wanted for robbery and carjacking. 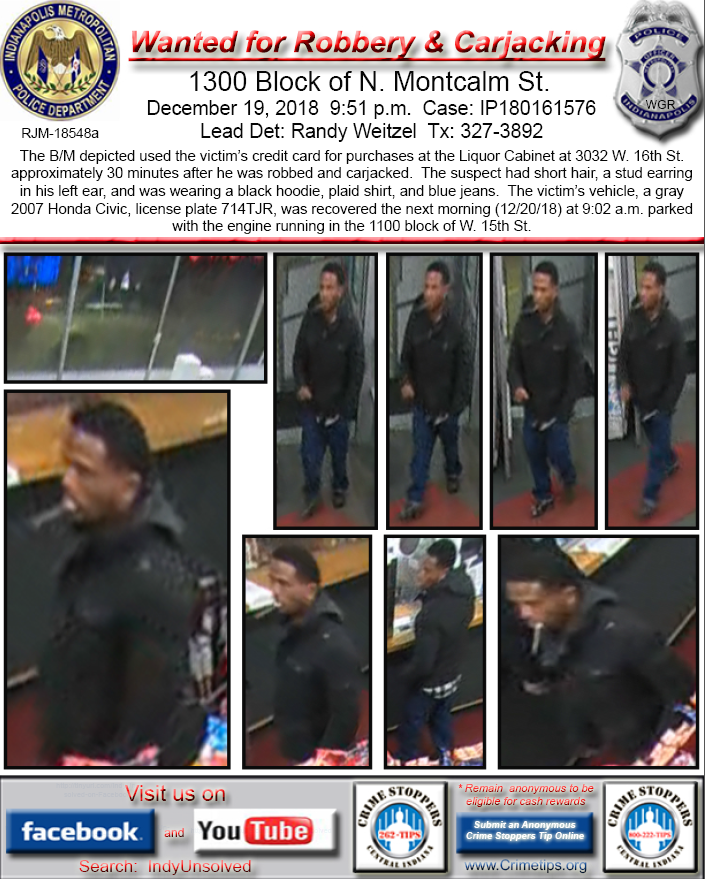 Police say just before 10 p.m. on Dec. 19, officers were dispatched to the 1200 block of Indiana Ave., in response to a robbery.

Upon arrival, they observed a man sitting on the east sidewalk of Montcalm St.

Officers observed a large bump on the left side of the man’s forehead, and was holding his head and had small cuts on his left hand.

According to IMPD, the man told officers he was walking away from his vehicle, a grey Honda Civic 714TJR, which was parked in a small lot on the southwest corner of 14th and Montcalm, when he heard foot steps and keys jingling as a person rapidly approached him from behind.

He said he was struck from behind and only remembered being hit on the head and the suspect demanding “everything he had”. He said he gave the suspect his phone, wallet and keys, before the suspect ran to his vehicle parked across the street and entered it using his keys.

The vehicle was last seen driving north onto Indiana Ave from 14th St.

The suspect was described as a black male, approximately six feet tall, in his late 20’s, wearing a black hoodie, dark jeans, and no shoes. 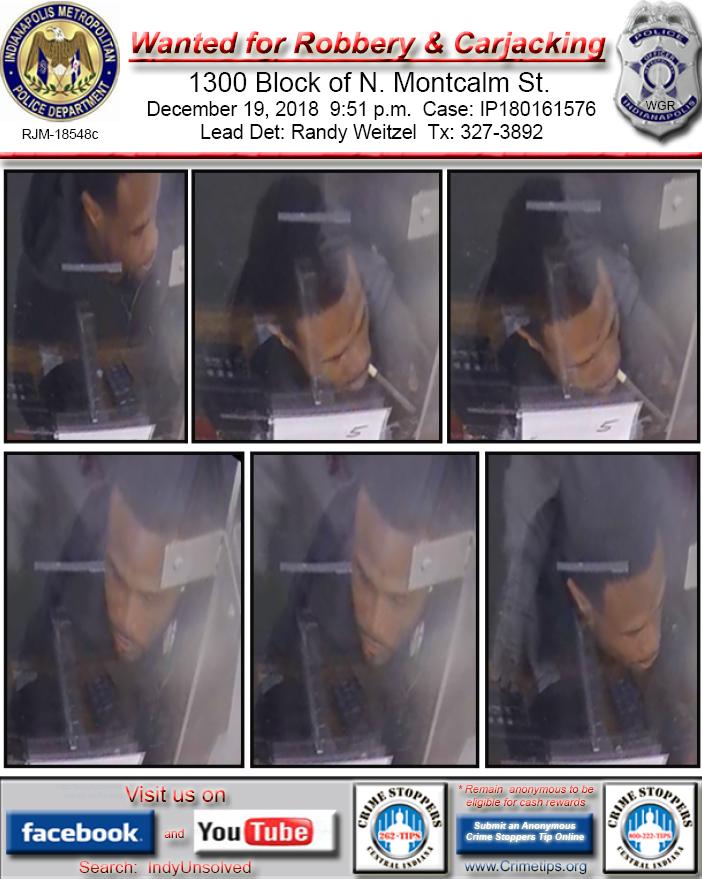 If you have any information on the man’s whereabouts, contact Crime Stoppers at 31-236-TIPS (8477)

MUNCIE, Ind. – Muncie police are investigating a shooting that left one person dead and another wounded.

According to the Muncie Police Department, officers responded to reports of shots fired around 4:45 a.m. at a home in the 400 block of West Howard Street.

Peter Manfredonia was taken into custody at the Pilot Truck Station near the Washington County Sheriff’s Office in Maryland after six days on the run.

LAWRENCE, Ind. – Police in Lawrence are investigating a deadly shooting.

According to the Lawrence Police Department, responded around 4:30 a.m. to a call of shots fired in the 5400 block of Caldwer Way in an apartment complex near E. 56th Street and 465.

41 million have lost jobs since virus hit, but layoffs slow

Homeowner upset after foul baseballs fly into her home

Police: Man says he broke into bank in order to heat up Hot Pockets

Not ready for camp? Other alternatives for kids this summer

While You Were Sleeping: Coronavirus updates for May 28

41 million have lost jobs since virus hit, but layoffs slow

Homeowner upset after foul baseballs fly into her home

Police: Man says he broke into bank in order to heat up Hot Pockets