HANCOCK COUNTY, Ind. — A man is in critical condition after being struck by a vehicle while riding his bicycle in Hancock County.

At around 10:30 Friday morning, police say they were called to the area of 1233 East State Road 234 for a bicyclist who had been struck by a vehicle. Someone driving through the area discovered the bicyclist laying in a grassy ditch and waving his arms for help. That person stayed with the bicyclist until authorities arrived and told police there were no other vehicles in the area when they found the victim.

The bicyclist was a identified as a 67-year-old man from Anderson. Police say he was wearing a helmet and high-visibility reflective vest at the time of the crash, and that his helmet likely prevented him from dying at the scene. The man was flown to Methodist hospital in critical condition.

Authorities say evidence indicates that the bicyclist was riding with traffic near the white fog line when he was struck from behind. Both the vehicle and the bicyclist were traveling westbound toward Indianapolis.

Investigators believe the vehicle that struck the bicyclist is a white or black, 2017 or newer, Ford F-250 or larger truck with extended tow mirrors. Police say they found evidence from the suspected vehicle at the scene and believe the vehicle to have extensive damage to the passenger-side headlight assembly and mirror.

An investigation into this incident is ongoing.

Anyone with information is asked to call HCSD Investigations at 317-477-1199. 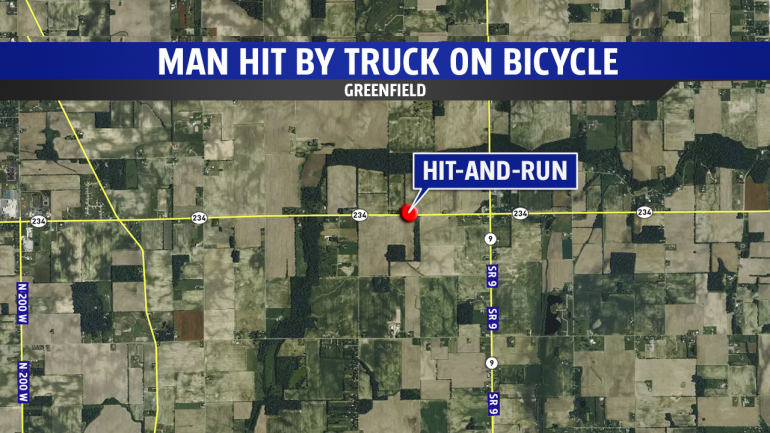 INDIANAPOLIS, Ind. -- It's a new year, but tragically Indianapolis is dealing with the same problem: homicides. In 2020, 245 Hoosiers died in Indy, the most ever.

INDIANAPOLIS --Authorities are looking for help investigating a burglary at an Indianapolis gun store.

the Bureau of Alcohol, Tobacco, Firearms and Explosives (ATF) partnered with the National Shooting Sports Foundation to offer a reward for information leading to the arrest and conviction of the individuals responsible for the burglary of 500 Guns in Indianapolis.

INDIANAPOLIS – Four Indianapolis Metropolitan police officers will not face charges for a deadly May shooting.

The Marion County Prosecutor’s Office said there was “no legal basis” for charges stemming from the May 2020 shooting of 19-year-old McHale Rose.

Death investigation on Indy’s east side

MRI researcher may have accidentally discovered how gas planets are magnetic

33 missing children, including some who were sexually exploited, found in California operation: FBI

Despite IRS warning, stimulus checks and debit cards cause confusion

Message in a bottle discovered decades after it floated away

Is there life after death? Businessman offers nearly $1 million to find out

Man pulled from burning apartment in Noblesville by neighbor

Death investigation on Indy’s east side