Monday, police arrested Damoine A. Wilcoxson, 21, after a SWAT standoff on the northeast side. The suspect had fired at officers and had a baby inside the apartment. He eventually surrendered and the baby was unharmed. 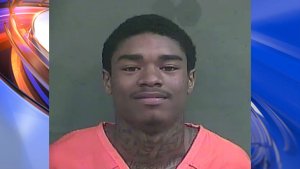 Police said they were serving a warrant at that location because Wilcoxson was believed to be connected to recent shootings at IMPD north and northwest headquarters.

After the standoff ended in the suspect's arrest, Zionsville police announced charges against the same man in connection with the murder of 82-year-old Jac Clements.

Wilcoxson is the suspect in all of these cases. In the Zionsville shooting, he faces one count of murder.

Clements was at his mailbox in the 800 block of Terrace Drive at about noon on September 28 when a man armed with a semi-automatic assault-style weapon opened fire. Zionsville police said at the time it appeared to be a random incident with no motive.

According to court documents filed Monday, police were able to connect shell casings from the two police station shootings and determined they came from the same gun. Racially-charged notes found at the scenes were also connected via handwriting analysis.

The notes said such things as "Whites will drop and gone drop at any time of the day." Court documents show there were overt threats to Caucasian women and children. "Whites must die," one note read.

Investigators were able to determine that four casings found in the Clements home matched casings from the shootings at the police stations. Some of them had the same ejector marks, and were found to be shot from the same firearm.

Lab results showed a partial DNA profile on one of the recovered notes, as well as a partial profile on a shell casing.

The DNA was placed into the Combined DNA Index System (CODIS) for comparison. There was a hit on the test and it indicated the DNA matched that of Wilcoxson, who had previous arrests in Ohio for robbery.

Court documents show Wilcoxson lived with a woman with whom he had a child. At one point in July, he allegedly threatened her with a gun. The woman drove a 2012 Chevrolet Impala, which matches the description of the vehicle used during Clements' shooting.

Wilcoxson made several Facebook posts under the alias "Frank Lucas," investigators say. He used "unique terminology of 'Yehuah' and 'Yeshuah,'" and posted pictures of black men carrying assault rifles behind text calling for social justice and retribution. These statements mirrored language found in letters at the shooting scenes.

Police saw the Impala would be driven to Hamilton Southeastern High School and parked there for several hours at a time. Police later found Wilcoxson's girlfriend worked there via a third party company that provides janitorial services.

On Monday, officers went to the northeast side apartment to arrest Wilcoxson when the standoff began.

Wilcoxson faces a maximum penalty of 65 years in prison and a $10,000 fine for the murder charge. More charges are expected to be filed in connection with the other incidents.

“As one can see from the Probable Cause Affidavit Wilcoxson is an angry individual who was looking to do harm to innocent people.  I am relieved to know that he is now in police custody.  My office will now get to work to see that justice is served and that he is successfully prosecuted and convicted for this horrible crime that he is alleged to have committed” said Prosecuting Attorney Todd J. Meyer.

In a monumental moment during the inauguration, Harris was sworn-in by Justice Sonia Sotomayer, the first Latina Supreme Court Justice.

(NEXSTAR) - Federal student loan holders won't immediately see the kind of massive debt forgiveness that Senators Elizabeth Warren (D-Mass) and Majority Leader Chuck Schumer (D-NY) have been pushing for from the Biden administration, but they will get a break on paying back loans as the country attempts to rebound from the pandemic.

Biden is asking the Education Department to extend a pause on federal student loan payments through at least Sept. 30, continuing a moratorium that began early in the pandemic but was set to expire at the end of January.

INDIANAPOLIS -- A person was shot and killed Wednesday evening on the east side of Indianapolis, according to the Indianapolis Metropolitan Police Department.

President Biden’s COVID plan during first 100 days in office, how it impacts Indiana

Now that Biden is president, here’s when you could get that $1,400 stimulus check

President Biden’s COVID plan during first 100 days in office, how it impacts Indiana

Now that Biden is president, here’s when you could get that $1,400 stimulus check