Drinking coffee could activate the body’s fat-fighting defenses, a discovery that could have potential implications in the battle against obesity and diabetes.

In a study published Monday, researchers at the University of Nottingham said that coffee may help stimulate our brown fat reserves, also known as brown adipose tissue, which play a key role in how quickly we can burn calories.

There are two forms of fat cells, brown cells and white cells, and each plays a different role in our metabolism.

While brown cells help generate heat, white cells are responsible for the storage of fat — or, energy — ready for release as needed. Levels of brown fat are known to be high in children but recent findings on the presence of brown fat in adults has restored hope to use them as targets to treat obesity.

“Brown fat works in a different way to other fat in your body and produces heat by burning sugar and fat, often in response to cold, said professor Michael Symonds, from the School of Medicine at the University of Nottingham, who co-directed the study. 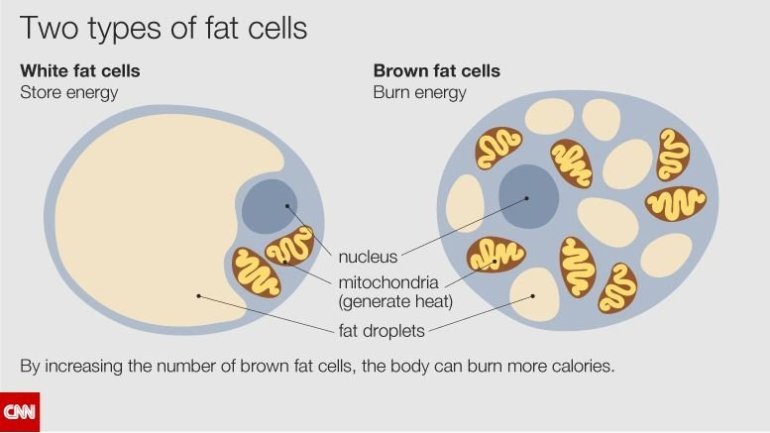 “Increasing its activity improves blood sugar control as well as improving blood lipid levels and the extra calories burnt help with weight loss. However, until now, no one has found an acceptable way to stimulate its activity in humans.”

The scientists started by testing out coffee on stem cells to see if it would stimulate brown fat. Once they found the right dose, they moved on to humans to see if the results were similar.

The team used a thermal imaging technique on four men and five women to trace the brown fat reserves and see how it produced heat.

“From our previous work, we knew that brown fat is mainly located in the neck region, so we were able to image someone straight after they had a drink to see if the brown fat got hotter,” Symonds said.

So will drinking a cup of coffee help you lose weight, as well as get out of bed?

The study only involved nine people and the research is still at a very early stage. Scientists say they still need to determine what it is exactly about coffee that busts fat.

“The results were positive and we now need to ascertain that caffeine as one of the ingredients in the coffee is acting as the stimulus or if there’s another component helping with the activation of brown fat,” Symonds said.

“Once we have confirmed which component is responsible for this, it could potentially be used as part of a weight-management regime or as part of glucose regulation program to help prevent diabetes.”

Back in October, a husband and wife were out walking near Twin Bridges Trails. When the couple returned to their car, they found the car window busted and the woman's purse was gone.

INDIANAPOLIS -- The city's community violence reduction team is a small group with boots on the ground, working to stop further crime in Indianapolis. Since January 1, Director Shonna Majors said the team's interrupted 66 incidents that could have resulted in more killings.

Majors said the team's noticed a surge in domestic violence incidents, and it's a tragic trend still growing.

INDIANAPOLIS -- The Indianapolis Metropolitan Police Department is investigating after a man was killed in a shooting on Indy's near east side.

The IMPD said the shooting happened in the 800 block of North Tuxedo Street around 9:40 p.m. Wednesday. When officers arrived, they found a man lying in the alley suffering from injuries consistent with a gunshot wound.

New memorial to represent Indiana’s fallen and their families