INDIANAPOLIS — Researchers with the Regenstrief Institute and Indiana University say information from a study recently published highlights disparities as demonstrated by data from the COVID-19 pandemic.

“In this study, we really wanted to look at different populations in Indiana who had been affected by COVID-19 in 2020,” said Brian Dixon, director of Public Health Informatics at the Regenstrief Institute.

According to researchers, Black communities and rural residents were hit harder than other populations by the COVID-19 pandemic. They hope the findings will highlight what needs to be addressed by public health efforts and also used to help shape the pandemic response and recovery efforts.

Researchers looked at more than 1.8 million Hoosiers who were tested for COVID-19, which accounts for 36.2% of Indiana’s adult population. Of those tested, about 354,539 (19.3%) of those tests came back positive.

Additionally, of those who tested positive, 31,352 Hoosiers were hospitalized, and a total of 8,104 (0.2% of the state’s adult population) died of COVID-19 either during their hospital treatment or at home following infection.

Data reviewed for the study was from the time period of March 1, 2020 through December 31, 2020. Researchers also reviewed the data by phase, being the initial lockdown period around March and April, after the state reopened, and the fall season.

Dixon said the results of the study likely won’t come as a shock to anyone at this point, but it was important to confirm the results of smaller studies and further highlight the disparities they already knew existed.

“I think the purpose of this study is really to confirm independently and scientifically using rigorous methods that indeed COVID-19 was hardest on Black populations and rural communities in the State of Indiana,” Dixon said.

“What people see on the dashboards and what they’re seeing in media stories, it’s true. Those communities were hit hardest,” said Dixon. 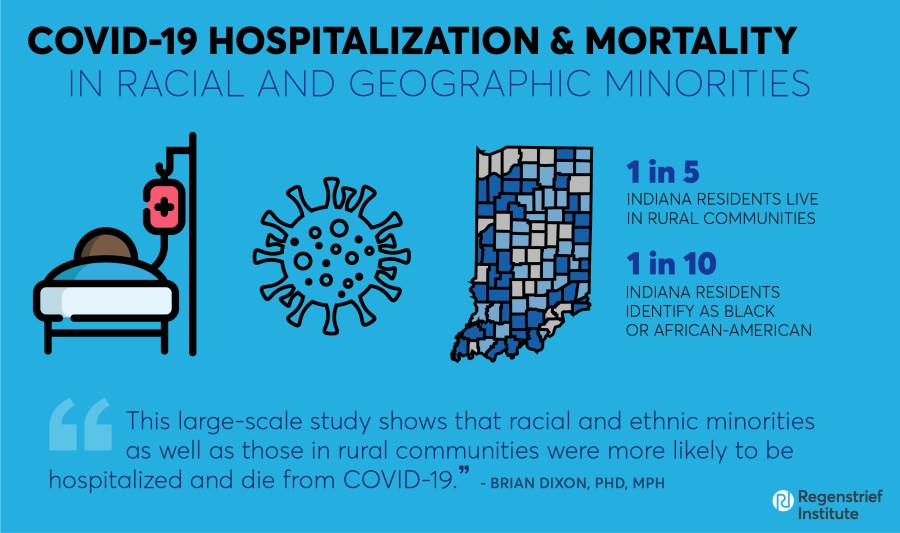 The study found that across all of 2020, Black individuals were twice as likely to be hospitalized as white individuals.

“It’s bittersweet. It’s welcomed that now we have data to support what we’ve known for years,” said Tony Gillespie, vice president of Public Policy and Engagement at the Indiana Minority Health Coalition. “The bittersweet part of it is we have data due to the pandemic, and so many people being impacted negatively.”

“Now we know for a fact we can even begin to double down even more on the disparities, but the way this new data, that’s not really new, the way that it came is at the cost of so many people around the country,” said Gillespie.

The study also found that during the first wave of the virus, beginning in March 2020, infections were highest in urban areas, specifically among Black residents.

“The pandemic then, especially after the state reopened, went into the rural communities and really impacted them hardest in the fall,” said Dixon, speaking on both hospitalization and death rates.

“There were more deaths in the rural communities overall than there were in the urban areas,” he said. “It might be surprising for some people because we tended to think it was a big-city disease in the beginning, but it started there, then it shifted.

When the shift happened, Dixon said hospitals filled up, people lacked access to primary care and those populations faced a heavy burden by the disease.

“After the pandemic ends, if there is an end, then we’re going to continue to see these disparities between rural and urban communities,” said Cara Veale, chief executive officer of the Indiana Rural Health Association. “There are a lot of barriers that limit rural residents from accessing healthcare.”

Some of those barriers include lack of access to public transportation, issues due to the geography of an area or even the ability to access healthcare in a timely manner.

“Sometimes in our rural communities we tend to see older, sicker populations, and so they’re just, by nature of where they are in the aging process, just genetically predisposed to, who are requiring healthcare more frequently,” said Veale.

She said hospitals in rural communities had to get creative in 2020 with how they would handle the volume of patients seeking care for COVID-19 treatment. That included things like tents, offsite clinics, and moving things around logistically to keep patients seeking treatment for things other than the virus safe.

“This study was conducted before vaccines were widely available, but now that they are, these two populations are some of the most reluctant to receive shots,” said Dixon. “It does sort of make one wonder why these communities now are hesitant to get the vaccine when they clearly were impacted the most last year by the virus.”

Across most communities, Dixon said there are some of the same trends that have been adopted, including the older population’s interest in the vaccine, even in rural communities.

With this information, Dixon said he hopes it will encourage people to get the vaccine moving forward to prevent a repeat of the hospitalizations and deaths the state reported at the peak of the pandemic.

“I think what we’re living through right now is a repeat of what we saw last summer and fall. We’re seeing another surge happen. It looks eerily the same as what we saw in this study,” he shared.

Veale said rural hospitals are feeling the impact as well.

“We are seeing, unfortunately, that wave, this kind of fourth wave affecting our hospitals to the point where we’re being stretched very, very thin,” she shared.

Veale said she encourages people who still have questions on the vaccine or anything related to COVID-19 to get their information from a reliable source such as a healthcare provider, not social media sites.

“In this instance, it’s more about information, education, and that’s how people can make more informed decisions,” said Gillespie. “It’s not a matter of right or wrong. It’s a matter of helping people make a decision, and in many instances, if the decision is not to get the vaccine, there’s nothing you can do for that.”

Gillespie said they know how important it is to make information available in terms of targeting specific racial and ethnic populations.

“We know nationally, it’s Black and brown people that lag in terms of a COVID shot. It’s rural communities as well,” he said.

The Indiana Minority Health Coalition has worked to host webinars and ensure people have access to educational sessions and materials across the state. Their focus has been to be broad and diverse in their targets of who they are reaching.

The coalition works with partners like the Marion County Public Health Department and will continue educating people on the disparities and working with more partners statewide to engage the community in these conversations.

Researchers say they hope that policymakers can also use the data at hand to target communities for recovery.

“It really suggests again that these communities are going to be hit hardest by the current surge, and so they’re going to need help and support to recover,” said Dixon.

“Just like a natural disaster, we need to figure out what we’re going to do and how we’re going to rectify the impact that this disease has had on communities,” he continued.

Arrest made in 3-vehicle crash that killed 1 man

Retired IMPD officer reverts back to training to …