INDIANAPOLIS, Ind. - The Indianapolis Colts home opener is days away, and one Twitter account has fans excited for the season.

The man behind the parody account @CaptAndrewLuck talked to us ahead of Sunday's season opener (1 p.m. Sunday on CBS4).

Many of its 273,000 Twitter followers theorize the creator is Andrew Luck himself, but that’s not true! The creator is a West Coast writer.

“I came across this photo that looked like Luck in the Civil War era, and I just thought that it was hilarious,” said @CaptAndrewLuck of his inspiration for the account. “I’m a huge history buff and I loved the Ken Burns series on the Civil War, and I just sort of cracked myself up making up this voice of Luck as a voice over in a series like that, but obviously instead of talking about war, he’s talking about football.”

The first tweet in June 2016 had meager beginnings, eight retweets and 57 likes, but the account ultimately took off. 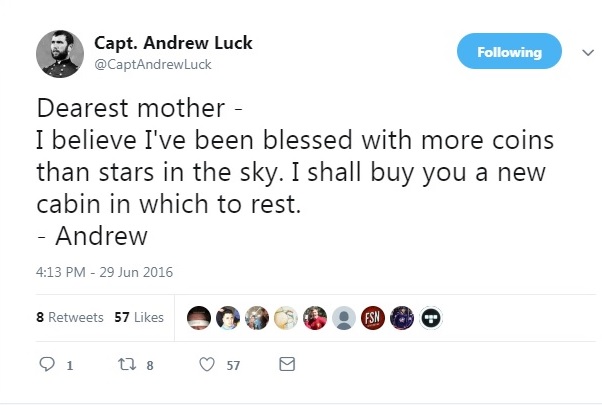 The creator keeps the posts positive through losses or struggles, like last season when Luck was out.

When Luck’s mustache made news, @CaptAndrewLuck wrote to his “Dearest mother.” 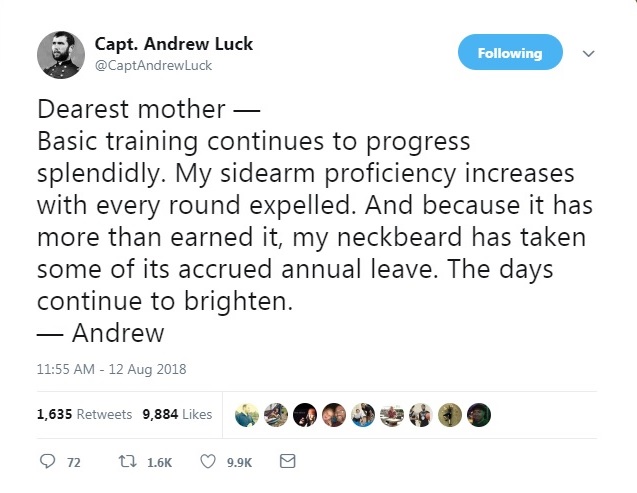 “I think that the fun of it for the fans is that there’s a connective tissue to what is actually going on,” the creator said.

When a healthy Luck threw his first touchdown of the preseason, the account’s tweet got a response from the San Francisco 49ers. 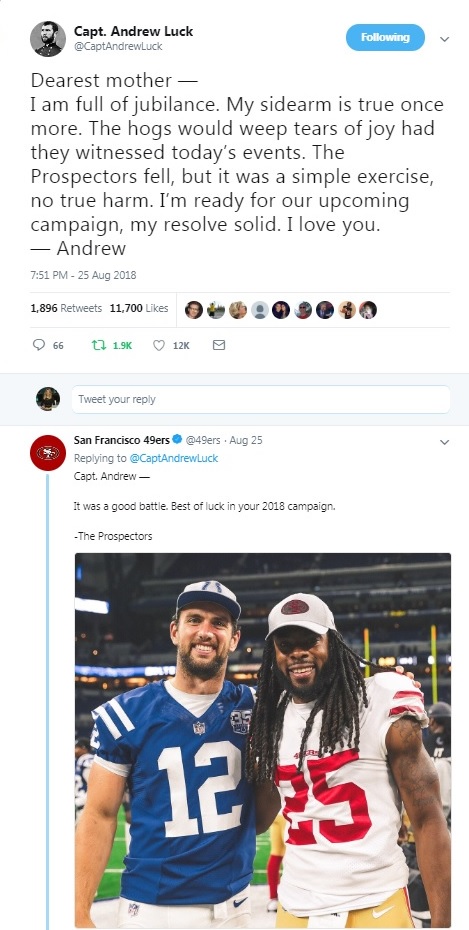 “He’s a heck of an athlete, and he’s an incredibly positive, good person, and I try to keep all that in mind,” said the creator.

He also said part of the fun is adding in other players and teams. In one tweet, he mentions “Our trusted sniper, Sgt. Vinatieri..” He said Luck would never just talk about himself, so he’s keeping that theme with the account. 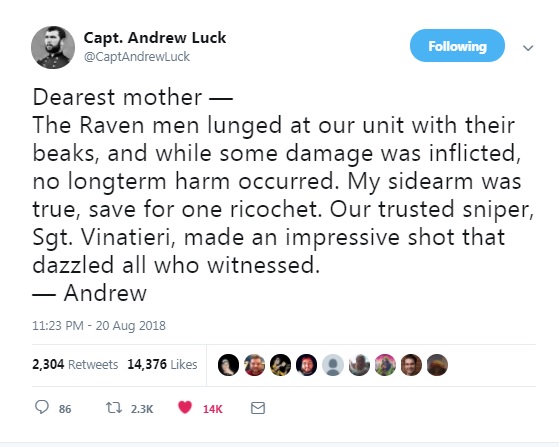 The account that began as a spinoff of a different parody account is seeing that theme continue. A t-shirt company in the Washington, D.C. area has printed its own “Dearest Mother” t-shirts in homage to @CaptAndrewLuck. They are not affiliated with the account, just fans like so many others.

UNITED NATIONS (AP) — Born out of World War II's devastation to save succeeding generations from the scourge of conflict, the United Nations officially marks its 75th anniversary Monday at an inflection point in history, navigating a polarized world as it faces a pandemic, regional conflicts, a shrinking economy and growing inequality.

Criticized for spewing out billions of words and achieving scant results on its primary mission of ensuring global peace, the U.N. nonetheless remains the one place that its 193 member nations can meet to talk.

INDIANAPOLIS -- What are Indiana political insiders saying about the latest news from the campaign trail? Will some of these week's big controversies and key endorsements matter to Indiana voters?

On this week's edition of IN Focus, panelists Lara Beck, Tony Samuel, Robin Winston and Mike Murphy discuss this week's top stories, including the state superintendent's endorsement of Democratic candidate for governor Woody Myers, and the latest news from Washington ahead of the first Presidential debate later this month.

According to the City of Kannapolis, Sgt. Dot Cole is the oldest living Marine.

U.S. and Texas have ‘out of control’ population of ‘super-pigs,’ expert says

Death ruled homicide after body found on northeast side of Indy