INDIANAPOLIS (Feb. 11, 2015) – A woman suffering from multiple gunshot wounds was found inside a truck in downtown Indianapolis Wednesday afternoon. 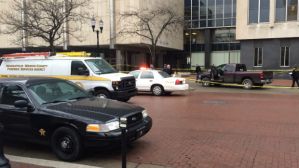 The Indianapolis Metropolitan Police Department said the driver of a pickup truck traveling west on Market Street tried to “frantically” get the attention of a police officer passing by around 1:35 p.m. The truck stopped near the City-County Building downtown.

Police said a woman suffering from multiple gunshot wounds was found inside the truck. She was taken to Eskenazi Health, where she is listed in critical condition.  Sources initially indicated the victim had died, but the woman is alive.

Just spoke with IMPD PIO who said the woman was in extremely critical condition, and that she's "not expected to make it," but she's alive.

Authorities said they do not believe the woman was shot downtown, and they are unsure at this time why she was brought downtown.  Police told CBS4 the driver was carrying a handgun and was detained for questioning.

Traffic was closed on Market Street between Alabama and Delaware while police investigated.

INDIANAPOLIS -- The city's community violence reduction team is a small group with boots on the ground, working to stop further crime in Indianapolis. Since January 1, Director Shonna Majors said the team's interrupted 66 incidents that could have resulted in more killings.

Majors said the team's noticed a surge in domestic violence incidents, and it's a tragic trend still growing.

INDIANAPOLIS -- The Indianapolis Metropolitan Police Department is investigating after a man was killed in a shooting on Indy's near east side.

The IMPD said the shooting happened in the 800 block of North Tuxedo Street around 9:40 p.m. Wednesday. When officers arrived, they found a man lying in the alley suffering from injuries consistent with a gunshot wound.

The charges stem from official misconduct that allegedly occurred in October of 2020 in Lawrence County. Indiana State Police say the investigation started when Bedford Chief of Police Terry Moore contacted them after becoming suspicious about the collection of evidence during an investigation by Crane.

New memorial to represent Indiana’s fallen and their families

While You Were Sleeping: Coronavirus updates for April 13