Skip to content
Breaking News
Breaking News
Homicide investigation underway after shooting near Canal
This is an archived article and the information in the article may be outdated. Please look at the time stamp on the story to see when it was last updated.

BLOOMINGTON, Ind. — A Hoosier athlete is determined to qualify for the 2020 Summer Paralympics in Tokyo, but a little over four and a half years ago he didn't know if he would ever walk again.

Qualifying competitions for the Paralympic games begin in April for Dylan Deem. That means daily training and laser focus for the 28-year-old.

Walking into the Indiana Fitness Club in Bloomington, Deem is all business. He wastes no time heading to the stationary bike and beginning warm-ups.

"Everything that I'm doing right here in the gym it translates into the ring," says Deem as he loads the dead lift bar with 45 pound plates.

The ring he refers to is the discus throwing circle. Deem first stepped in to compete just a couple of years ago. Now he's hoping to make it the international stage. 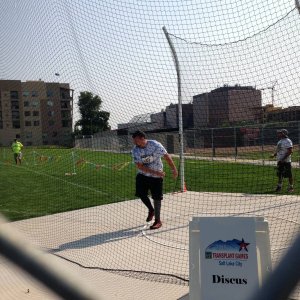 He will have four months and eight competitions to qualify. That means one of 48 throws will have to go the distance.

Hard work has never been a stranger to Deem, and neither has adversity. He was diagnosed with cancer at age 3, and he lost his left leg at age 4.

"Amputation and six months of chemotherapy was the treatment," he recalls. "It was called synovial cell sarcoma. It's a rare bone cancer that affects 1-3 in every million children annually."

He was only the second patient diagnosed at Riley Children's Hospital. He was the first to survive.

While cancer would not return to the 4-year-old amputee, it brought severe complications later in his life.

"By the time I was 13, I was kind of having a lot of trouble breathing, and I couldn't even walk up 3 steps without being completely winded."

The chemotherapy damaged his heart. Doctors told him only seven percent was working.

He lived with the pain for 10 more years. Doctors told him if he didn't get a transplant he would die in two years.

He was approved for transplant in 2014. Doctors asked him to move in to the hospital as soon as possible.

"Moved in on December 1st, and four days later I got my first heart. I've had two hearts."

His body rejected the first heart within 24 hours. After six weeks and seven open heart surgeries, he received his second.

"There were many times I probably should have died," says Deem. "There was definitely a higher power there and a lot of prayers."

Those prayers would be answered through a 21-year-old college football player named Cody.

Upon his death, Cody's organs helped save nine people. His donated heart is now the pulse of Deem's life.

He hopes Cody would be proud of what he's worked to accomplish. He hopes he would be proud of the 37 medals laid out on his kitchen table. The medals were won at competitions from the United Kingdom to Salt Lake City. They include 25 gold.

Deem's donor family is part of the Indiana Donor network. He still keeps in with them, and gives them souvenirs from his competitions. Each one is a way to say thank you for the chance to live and compete.

Back at the gym, as he loads weighted plates onto the barbell, Deem reflects on the last few years. He recognizes the pounds on the bar are over three times what he weighed when he left Methodist Hospital.

Now he hopes to compete against some of the best athletes in the world.

No matter the challenge, he now keeps one thing in mind.

"Somebody died to give me a chance to live, and that's something I don't take lightly."

INDIANAPOLIS -- A woman was stabbed to death Saturday night on the west side of Indianapolis, according to the Indianapolis Metropolitan Police Department.

Around 11:15 p.m. Saturday, police were called to the 400 block of Arthur Avenue on a report of an injured person.

Those cases were reported to ISDH within the last 24 hours.

MUNCIE -- Indiana State Police are investigating after a deadly officer-involved shooting in Muncie.  Muncie police were called out just after 2 a.m. Sunday for reports of a suicidal person, whom they found in an alley near 14th and High Street. Officers discharged their weapons during the encounter, wounding the person. The person was taken to a nearby hospital where they were pronounced dead.  State police say a knife and…

IMPD responds to 2 shootings in half an hour, 3 injured

While much of US scales back on holiday, Trump plans to go big

Students in Indiana can return to sports, school activities

Police say woman walked into northwest side gas station with gunshot wound, collapsed on the floor