INDIANAPOLIS, Ind- The numbers are in, and sports gambling is a big hit in Indiana.

Since becoming legal in September, Hoosiers wagered nearly $436 Million, resulting in about $41.4 Million in taxable revenue. That earned the state roughly $3.7 Million. The State collects a 9.5% tax.

“There's no doubt Indiana is off to a great start from a sports betting perspective,” said Marcus DiNitto, Managing Editor of BetIndiana News.

DiNitto says the State’s first month set a record, and the addition of mobile apps has only helped increase that number.

In the first month of operation, Hoosiers had to place bets in sportsbooks. That resulted in $35,215,416 wagered.

By December, a majority of the bets were placed on mobile sports. The total amount wagered that month was $161,808,925.

"When you legalize it, you make it accessible, and you take away the stigma, people are going to bet on sports,” DiNitto added.

The first 4 months of betting was anchored by football, which saw more than 40% of the action. Now that football season is coming to a close, DiNitto says the numbers shouldn't slow down. 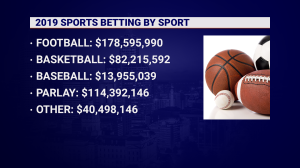 If the betting stays on pace, Indiana would be on pace to see more than $11 Million added to the general fund in the first year. State Senator Ron Alting has proposed a bill that would allocate that money for teacher pay increases.

"Will it solve the whole problem for increasing teacher salaries? Obviously not," Alting said. "But it's a start in the right direction.”

However, competition could cut into that revenue. Right now Indiana is one of 13 states where sports gambling is up and running, but 6 other states including border states like Michigan and Illinois just made it legal. Kentucky and Ohio join more than a dozen other states that will take up the issue this year.

"People from Illinois come across the border to bet, so yeah it will eat into it," DiNitto said. "But that doesn't mean it’s gonna necessarily slow down the pace of growth.”

The Indiana Gaming Commission also recently approved a list of prop bets for the Super Bowl that DiNitto says even Nevada sportsbooks can't offer. Some of those bets on the list include the outcome of the coin toss, and even the color of the Gatorade poured on the winning coach.

The Indiana Family and Social Services Administration announced Friday it had developed the map in partnership with the state’s food banks, the Indy Hunger Network and the food bank group Feeding Indiana’s Hungry.

INDIANAPOLIS, Ind. — Drinking water fountains and taps at public and private schools in Indiana will be required to be tested for lead contamination by 2023 under a new state law.

The law requires schools' drinking water equipment to be tested by Jan. 1, 2023 and take action if results show lead at higher than 15 parts per billion. Lake County schools will have to test every two years.

INDIANAPOLIS, Ind. — A group of people in Irvington is doing its part to help during the coronavirus crisis.

The "Irvington Mask Makers" are volunteers with a specific goal in mind and that's to make enough masks for those who need them.