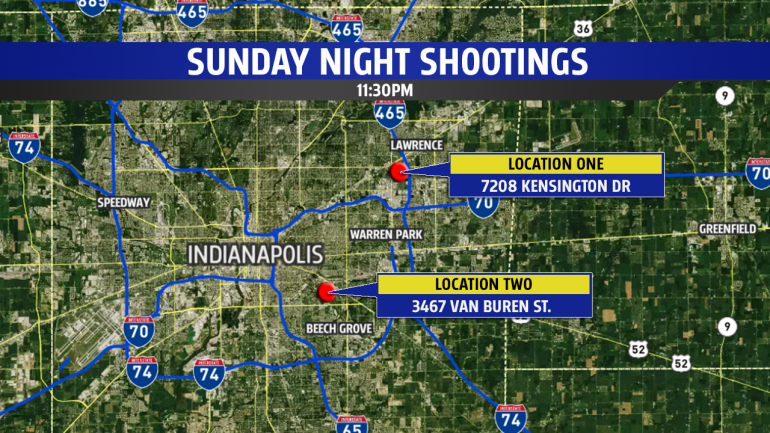 The first shooting occurred around 11:30 p.m. on the east side in the 7200 block of Kensington Drive near East 38th Street and Shadeland Avenue.

Officers with the Indianapolis Metropolitan Police Department responded to the area after receiving a call about shots fired.

Police found Brandon Woodfork, 26, suffering from at least one gunshot wound. He was dead at the scene. Investigators haven’t released his age or any other identifying factors at this time.

The second shooting occurred on Indy’s south east side just seven minutes later. IMPD responded to the 3400 block of Van Buren Street, near Raymond Street and Sherman Drive, on a report of a person shot.

Officers found Tiaira Cox, 28, suffering from a gunshot wound. Medics transported her to the hospital where she later died from her injuries.

IMPD says they do not believe these shootings are related.

If you have any information about either of these shootings, call Crime Stoppers at 317-262-TIPS.

INDIANAPOLIS – The Big Ten announced its plans for the upcoming fall sports season.

The conference approved plans for a 10-game, conference-only schedule beginning as early as the weekend of September 5 with final games slated for November 21. There was no information about whether fans will be allowed in the stands.

Bush's victory came in a rematch of 2018, when she failed to capitalize on a national Democratic wave that favored political newcomers such as Bush’s friend, Rep. Alexandria Ocasio-Cortez.

The latest incident where this took place is in Edinburgh. Superintendent Dr. Doug Arnold announced Tuesday evening that a student at the high school tested positive for the coronavirus.

Negotiators hope to reach deal this week on stimulus package with $1,200 payments

AP Source: Each division to determine whether to hold NCAA fall sports championships

While You Were Sleeping: Coronavirus updates for August 5

No fans at Indy 500 means big loss to local economy

Wave of evictions expected as moratoriums end in many states

Negotiators hope to reach deal this week on stimulus package with $1,200 payments

AP Source: Each division to determine whether to hold NCAA fall sports championships