INDIANAPOLIS, Ind. -- When you think about whiskey and where whiskey is made, most people instantly think of Kentucky and Tennessee and their famous distilleries. But a trio of Hoosiers is setting out to change that.

When the three childhood friends started West Fork Whiskey just over two years ago, they had one mission—to make great whiskey in Indiana. And that’s what they’re doing at their new tasting room and production facility at 1660 Bellefontaine Street in the ever growing Kennedy-King neighborhood.

“We saw a lot of other companies doing it traditionally in Kentucky and Tennessee. We said ‘We have the grain; we have the same water that they use in Kentucky. Why is no one doing it great in Indiana yet?'” explained co-founder David McIntyre.

They opened their first production facility in Zionsville, but last fall they moved their production and a new tasting room here to the Kennedy-King neighborhood where McIntyre says “the sky is the limit.”

“We got in [the neighborhood] at the right time… We picture it being like a Fletcher Place or a Fountain Square or a Lockerbie in the years to come. We’re just thrilled to be here,” he said.

The tasting room offers a view into the production area, just on the other side of the glass. Pull up a chair to chat with the makers and grab a cocktail. As expected, the traditional Old Fashioned is the most popular cocktail. But that’s just the start.

“The Beet on the Brat is a very unique cocktail. It also uses our bourbon with house made amaretto and some chili lime bitters… the Smash is another very popular whiskey cocktail for the summer. Its mint, lemon simple syrup, and our all or nothing corn whiskey,” said McIntyre.

Four Things You Need to Know:

If you’re a fan of Fireball and other cinnamon flavored whiskeys, this might pique your interest:

“We have what we think is the only all-natural cinnamon infused whiskey on the market,” McIntyre said.

Hungry? Yelp reviewers seem to love that two neighboring businesses are supporting each other in a unique way.

“Cannon Ball Brewing actually sells their food right here. You can get it on a ticket with your drinks all in one shebang. You can have the food and the great cocktails all in one stop,” said Brittany Smith of Yelp Indy. 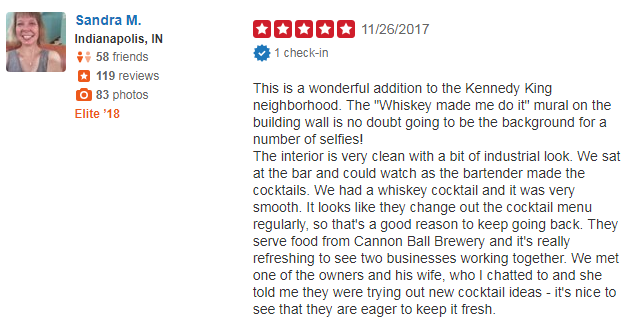 They also have a great set-up for warmer months, with big garage doors that open up to the outside. There, they will have outdoor seating for at least 25 people as well as a totally altered summer cocktail menu.

And that’s not the only new thing on the horizon.

“In the coming months we’ll be releasing our traditional rye whiskey— which there is few of those in the state… Then moving forward, we’re going to have some experimental collections coming out. We’re doing unique barrel aging and unique mash bills hopefully quarterly, yearly, whatever it may be to release a truly unique whiskey to the market,” said McIntyre.

While in the Kennedy-King neighborhood, check out these other popular local businesses nearby:

LEBANON, Ind. -- Less than a year ago, three friends born and raised in Boone County joined forces to purchase a butcher shop.

St. Adrian Meats and Sausage, located at 110 W. Washington Street-- right on Lebanon’s town square-- was originally opened back in 2014 under different ownership.

Stocks continue to fall, market heads for worst week since 2008

Police investigating death on the near northwest side

Mistaken for bank robbers, elderly couple is handcuffed by police

Coronavirus fears could lead to shortage of hand sanitizer, CVS and Walgreens warn

Stocks continue to fall, market heads for worst week since 2008

Police investigating death on the near northwest side