INDIANAPOLIS, Ind. — Back in the 1930s, Iozzo’s Garden of Italy was the place to get dressed up and go out to eat in downtown Indianapolis.

Originally located at 323436 S. Illinois Street (where the Hyatt hotel currently sits), Iozzo’s was the largest restaurant in the Midwest—with a dining room that sat 500 people and a banquet room that could seat 350 more.

There were live Vaudeville acts, dinner and dancing and plenty of glamour. That was until an incident involving a bar brawl, shocking headlines and a murder trial drove the family to and shut the doors of Iozzo’s for 70 years.

That was until 2009 when Katie Harris reopened her ancestors’ family business— this time in an old 1880s building located at 946 South Meridian Street on the Old Southside.

Harris says she loved to share the story of her family and their business because she knows as well as anyone that this is a place where the history is just as enticing as the menu.

“My great grandfather Santora is the one who greets everybody when they walk in the door,” said owner Katie Harris.

Black and white photos on the walls are lingering reminders of the original Iozzo’s Garden of Italy. But here on the Old South Side, Harris has been carrying on her family’s tradition for the past 10 years.

Before she could reopen her family business, however, she had to get her grandmother’s blessing.

“She goes, ‘Katie, do you have to tell the story?” recalled Harris. “And I said, ‘Grandma, if we don’t, somebody else will.”

That story involved a bar brawl, murder trial and salacious headlines in the 1940s—which led to her family to close their doors for 70 years. 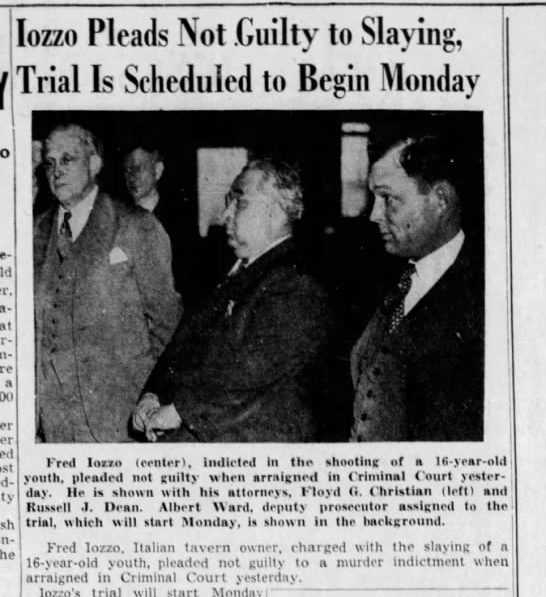 The story plays out like the dramatic plot of a movie, but it was all too real for the Iozzo’s. And there’s no better person to tell the tale in their own words than Harris– the great granddaughter of the Iozzo family’s patriarch.

“One evening in October of 1940, my grandfather Dominic was tending bar. His sister, Mary –who used to sing at the restaurant– was finishing up her singing shift and sat up at the bar and had a cocktail. Some of her admirers were also sitting at the bar and had a few drinks during her show. They begin making passes toward my great aunt Mary after her performance. My grandfather didn’t like that too much and kindly asked them to leave. Well, they didn’t like that too much [and] they began arguing with my grandfather  and that argument turned into a fight. The fight basically turned into an all-out brawl where they had my brother on the other side of the bar, beating him up. At this point in the evening, there’s all sorts of commotion. People are yelling and screaming. My great grandfather, Santora—who was in the office–  comes out to see what’s going on.  He was like “Oh my God, they’re going to kill my son!” So, he goes into the office and grabs his gun. When he comes out, one of the gentlemen who was fighting with [Dominic] is on top of him, strangling with him. My great grandfather immediately reacts and pulls the trigger. That bullet goes through that gentleman who was on top of my grandfather strangling him and actually lodges in my grandfather’s spleen.  At this point, my great grandfather freaks out. He was like “What have I done?” and throws the gun into the dumpster. They called the police, they called the ambulance. .. At the police station, nobody knew what’s happened. Everyone had a different version of what had happened that night. And during that evening, that gentleman who was strangling my grandfather unfortunately died of his gunshot wound.  My grandfather did survive—luckily, or I wouldn’t be here—and had his spleen removed. But the police decided to charge my grandfather and my great grandfather both with murder. During the discovery process, they dropped the charges against my grandfather but my great grandfather went to trial. January of 1941 was a pretty hostile time to be an Italian American with everything going on overseas with Mussolini and Hitler starting to join forces and with everything going on in Chicago with the mob, so Indianapolis really wanted to make an example that said, ‘We’re not going to stand for this Italian violence.’ [The case] went to trial  and became the ‘Sensational Trial of Fred Iozzo,’ as labeled by the Indy Star and news. Every day, [the media] had recaps and it had kind of become this show that everyone wanted to follow. My grandfather was ultimately convicted, but convicted of involuntary manslaughter and was sentenced to prison. But he didn’t spend any time behind bars… he actually became the personal chef of the warden the day he got there and was released about 18 months later. Part of the sentencing though was that the family lost their ability to have a tavern [and] liquor license. So they were never able to reopen the restaurant.  And even without that, they didn’t want to. They were so ashamed of what had happened and lost everything… and just kind of wanted to start their lives over. So they did. They moved away from the Italian community here—and basically 3 blocks from [where the restaurant is now] is where my family used to live–  and kind of started their life over on the north side of Indianapolis. And they kind of never spoke of it again. And if they did, they only referred to it as ‘The Fire.”               -Katie Harris (Owner, Iozzo’s Garden of Italy) 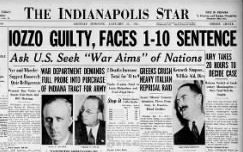 These days, “The Fire” that once embroiled her family has long since been extinguished. But that didn’t make it any easier for Harris to convince her grandmother that Iozzo’s Italian Garden should reopen their doors.

“For us, it’s a part of what makes us who we are and actually a part of Indianapolis’ Italian history,” Harris explained. “But for [my grandparents], it was such a tragedy, they didn’t want to go relive that in such a negative light.”

Fortunately, with a little convincing and a promise to her grandmother that everything would be okay, Harris finally got the green light in Spring of 2009. Then, in August, Iozzo’s Italian Garden officially reopened its doors to a very excited Indianapolis community.

In September, they held their official grand opening party—which happened to coincide with her grandmother’s 95th birthday. And although she was once again apprehensive, Harris’ grandmother showed up.

But this time, she got a reaction she wasn’t expecting.

“Everybody that night stood up and gave her a standing ovation,” recalled Harris. “And she looked over at me and says, ‘They don’t hate us anymore’ And it was just so touching.”

However, she did have one grievance to share with her granddaughter.

“At the end of the night she goes, ‘Katie, this has been the perfect evening, but I’ve just got one complaint,” said Harris. “So I say, ‘Okay grandma, what’s that? And she goes, ‘Katie, you’re making your meatballs too big!”

But if you ask any of Iozzo’s loyal customers, the meatballs are just right. And that’s because Iozzo’s still uses her family’s same tried and true recipe that was used at the original restaurant all those years ago.

“Our meatballs are hand rolled in-house every single day with veal, pork and beef slow cooked in sauce,” said Harris. “Then our family’s Iozzo sauce is slow cooked on the stove about 4 times a week here with pork spare ribs and it just kind of smells of my grandmother’s kitchen.”

When it comes to entrees, the classic spaghetti and meatballs are always a top seller, as well as the lasagna bolognese.

“It’s a 5-cheese vegetarian lasagna,” Harris said. “Then, we put a bolognese sauce and an alfredo sauce on top… The bolognese sauce has that veal, pork and beef kind of traditional, carrots and a touch of heavy cream just to kind of cut the acidity a little bit.”

If you’ve saved enough room for dessert, Harris suggests a slice of their Italian cream cake.

“It’s a pretty dense cake with a cream cheese frosting and toasted coconut flakes, with crushed walnuts on the side,” she said. “It’s perfect with an espresso or a limoncello.”

One thing that makes Iozzo’s limoncello unique is they make it themselves with the help of Indy-based 8th Day Distillery.

They also make their own signature wine.

“We go out to California every year and make wine for the restaurant,” said Harris. “We just actually got in our 3rd wine in our heritage collection, named ‘Mary’s Melody’ after my great aunt Mary, who used to sing at the restaurant.” 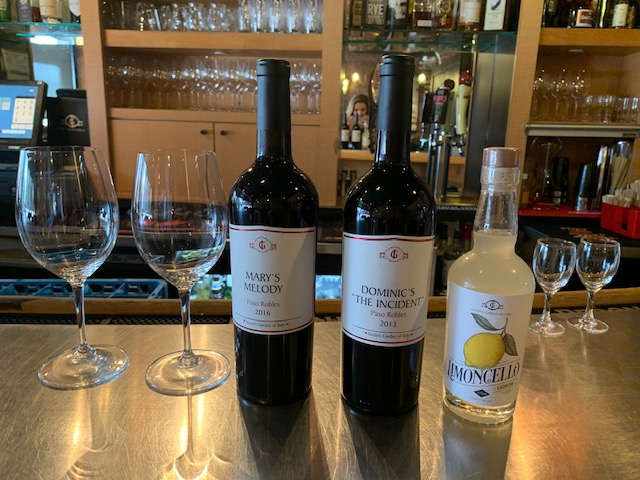 Although the location has changed, one thing has remained the same here at Iozzo’s: the emphasis on family. Many of Harris’ family members either work at the restaurant or frequent it often. But even if you aren’t family, the atmosphere inside will make you feel welcomed as if you were.

From the warm ambiance to the hand-crafted Venetian glass light fixtures, the space feels like less like you’re dining in Indianapolis and more like you’re stopping in to someone’s dining room in the Iozzo family’s hometown of Monterosso, Calabria in Italy.

“We took a lot of care in trying to recreate Italy here as much as possible so out back of the restaurant we have an amazing courtyard with cobblestone brickway and lights strung overhead,” Harris said.”When people walk in they feel like, ‘Gosh I just stepped into Little Italy or Italy itself.”

It’s not surprising that just inside the restaurant’s entrance, you’ll find a wall of plaques and acknowledgements honoring Iozzo’s for their excellence. However— for Harris—more important than any accolade is the knowledge that she has made her family proud.

“It’s an honor… I feel every day, I get to throw a dinner party for people I don’t even know,” she said. “It’s very exciting being able to carry on our family’s tradition and legacy… That’s our mission: to serve the finest in Italian cuisine and wine to the families of Indianapolis.”

Four Things You Need to Know About Iozzo’s Garden of Italy:

For more information about Iozzo’s Garden of Italy, check out their website by clicking here. To see more photos and reviews by local Yelpers, check out their Yelp profile. You can also connect with them via Facebook.

While on the Old Southside, check out these other popular locally-owned businesses:

A house divided: Colts or Steelers?

1 dead after domestic disturbance in Cumberland

Pacers' Oladipo will return to play against …

Even though Black Friday and Cyber Monday are over, …

These 25 deals were the most shopped among BestReviews …

The best gifts for 5-year-olds

The best gifts for 10 year olds