From the Directors of "RBG," "Gabby Giffords Won't Back Down" Showcases How the Former Congresswoman Got Her Voice Back and Now Speaks Out for Others

The film highlights Gabby's struggle with aphasia after being shot in 2011. In 2017, Gabby co-founded Friends of Aphasia to help the two million other Americans living with the communication disorder.

TUCSON, Ariz., July 12, 2022 /PRNewswire/ -- On January 8, 2011, a gunshot to the head almost permanently silenced former Congresswoman Gabby Giffords. But Gabby refused to back down from her mission of public service. Working with speech-language pathologist Fabi Hirsch, PhD, over the past decade, the former congresswoman has regained her ability to speak and today uses her voice to advocate for gun safety and for the two million Americans living with aphasia. 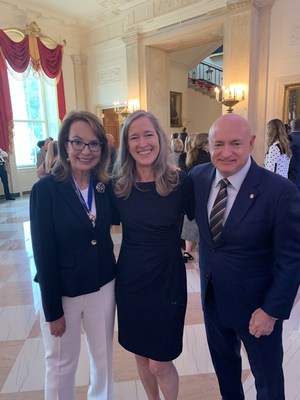 As the result of the gunshot wound suffered while meeting with constituents in Tucson, Arizona, Gabby struggles with a communication disorder called aphasia, which robs individuals of the ability to speak, understand language, read, and/or write. As Fabi explains in the film, and as Gabby demonstrates, aphasia does not affect intelligence; it affects the ability to effectively communicate.

Although over two million people in the United States are living with aphasia, almost 85% of Americans say they have never heard the word. To combat the lack of awareness and limited speech therapy services for people living with aphasia, in 2017, Gabby and Fabi joined forces to form a nonprofit organization—Friends of Aphasia—dedicated to advocating and providing services for those impacted by aphasia.

As highlighted in the documentary and previously on PBS Newshour, Gabby continues to work tirelessly with Fabi to recover her language and communication skills. From the early days of her recovery in which she was able to say only "what" and "chicken" to delivering a speech viewed by millions at the Democratic National Convention, Gabby personifies courage, perseverance, and her own motto of "moving ahead." She was recently awarded the Presidential Medal of Freedom, the highest civilian award.